After a very stormy night, with high winds wreaking havoc with power lines ashore and regional ferry services, shipping seemed to return to normal this morning, even though it was still windy, with the arrival of three container ships. Regular callers Atlantic Star and Bilbao Bridge, one after the other for Fairview Cove had all four harbour tugs in Bedford Basin at one time.

However before that happened a first time caller tied up at Halterm. CMA CGM Amazon arrived on the Columbus JAX service. Although similar in size to the other 18 or so ships on the rotation, it is not owned by CMA CGM or their wholly owed APL. Its owner is listed as Dias Container Carrier SA c/o Capital Ship Management of Piraeus, Greece. With 60 plus ships of all types totaling over 7mn tonnes deadweight under its control, Capital is one of the larger Greek shipping companies. Most of its ships' names begin with the letter "A". 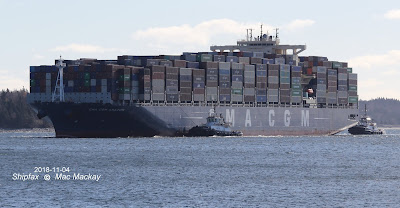 
When CAM CGM Amazon arrived at Halterm, it squeezed in astern of San Adriano, yesterday's sole arrival, but which could not work last night due to fierce winds. 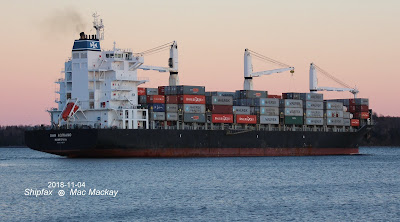 San Adriano, sailing on the Maersk Montreal Mediterranean Express (MMX) service, completed loading and sailed late this afternoon (and in daylight, thanks to the switch back to Standard time.) It is one of five ships on the service, that seem to be changing out from the original callers that started calling here in August, so this is likely its last call.


Owned through the Claus-Peter Offen interests of Hamburg, the ship was launched in 2008 under its present name, but was renamed Ibn Qutaibah for a year before reverting back. It is a product of Hyundai Mipo, Ulsan and at 22,914 grt, 28,300 dwt, has a capacity of 1819 TEU including a large reefer component of 462. It is also equipped with three 45 tonne cranes.