It is often said that if Canadians did not have weather to talk about, conversations would grind to a halt. It is a more serious matter for mariners, who have to cope with all sorts of weather, some of it very dangerous. You will see from several recent posts here that weather can effect arrivals and departures and even vessels in the port. High winds for the last 24 hours, reaching the 90 kph range in Halifax have certainly delayed ships, but once the wind moved round from easterly to westerly, there was some lee created by the land and three ships were able board pilots and enter port, albeit later than planned. 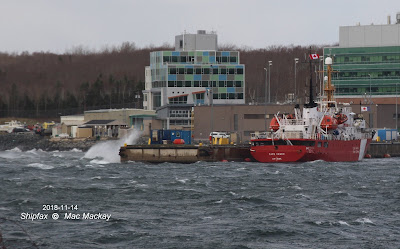 Westerly winds blasting across Bedford Basin at times swept over the Bedford Institute pier.
Cape Roger, moved to the lee side of the wharf.

Ships heading southwest were finding it hard going at sea and Qamutik anchored off Halifax at about 2200 hrs to get out of the weather.  The ship has had an adventurous summer. The last supply ship to call in Milne Inlet for the Baffinland iron mine project, its arrival was delayed by heavy ice. It then suffered a main engine failure October 19. Fortunately the icebreaker Botnica and the tugs Océan Tundra and Océan Raynald T were on hand ready to return south and they were able to get the ship out of the area, but it had another delivery to conduct before the two tugs could tow it home. The convoy also took shelter near Havre St-Pierre for a time and finally arrived Sept-Iles Bay November 5. It must have unloaded its return cargo of empty containers and the like while in Pointe Noire. It may also have loaded a cargo of aluminum.
The ship was apparently repaired in good order and it was able sail November 12 destined for Baltimore. The ship is bareboat chartered back to Spliethoff's until next summer. Built as their Edisongracht in 1994 it has a grt of 8448 and dwt of 12,760 and is fitted with three 60 tonne cranes. It has been chartered back to Spliethoff each winter since 2008 when the Logistec subsidiary acquired it. 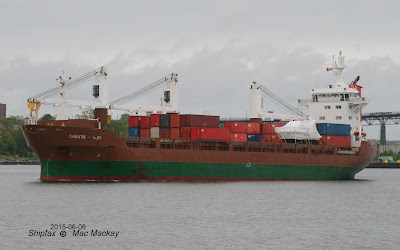 When the ship was in Halifax in 2015 it was carrying containers, some breakbulk, including steel plate, and a shrink wrapped power boat - typical cargo for Spliethoff.


The question has been raised if there have been more weather related delays. This may be an unanswerable question, because there are several factors at work.

The first is larger ships. The big container ships, some up to 10,000 TEUs, and autocarriers, are much more subject to windage than smaller ships, and thus much more difficult to bring into harbour and berth. It the winds are too high there is greater risk of damage to the ship or the port facilities with bigger ships. 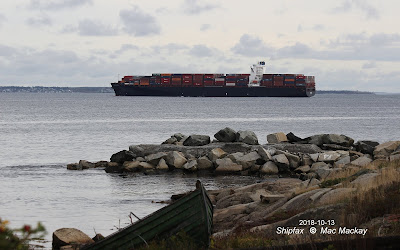 The huge slab sides of big container ships make them much more susceptible to windage.

More critical however is the ability of pilots to embark and disembark in safety. The huge freeboard on these ships is a factor. Some are equipped with pilot doors set into the side of the ships, but most are not. Therefore the pilot must climb a ladder or step onto a platform from a wildly gyrating pilot boat. 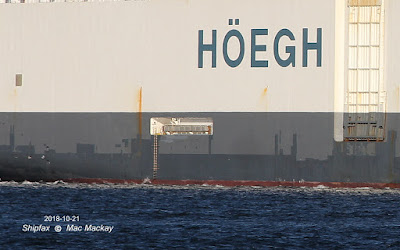 Set low in the side of this autocarrier the pilot ladder and accommodation ladder are used in combination. 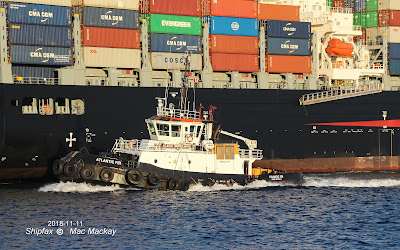 It is a long way up to the main deck on container ships.

That brings up the pilot boats themselves. Built for good speed to reach the pilot station quickly, they must also have good seakeeping ability (including maintaining a course). The current Halifax pilot boats may be a factor in recent delays, at least according to some, but I would not support this opinion as the sole factor. 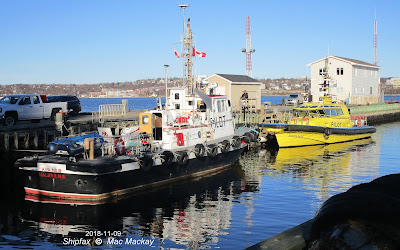 The current pilot boats, Nova Pilot and Scotia Pilot (in yellow) certainly have low freeboard compared to the older boats such as A.P.A.No.18, in port for refit, and are somewhat smaller. They are also waterjet propelled.


Then there is the climate and the prevalence of bad weather recently. This may be related to the location of the jet stream that forces its way south causing high winds. A seasonal fluctuation in the location of  jet stream, caused by forces as far away as the Pacific Ocean can effect weather here. It may also vary from year to year. This may be one of those years.

Weather is a reality for shipping and port operations, and I am sure will excellent fodder for continuing  discussion.