The self-unloading bulk carrier Algoma Value arrived this morning and tied up at pier31. I noted some tank trucks waiting, so it is likely to be bunkering, but may also have some maintenance work to do. 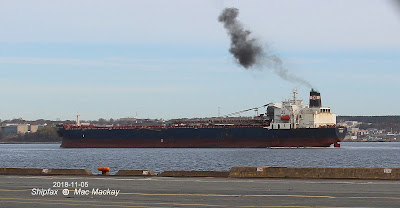 CSL Value "puts on the brakes" as it reverses engines to slow down before turning into pier 31. Two tugs are on the ship's starboard side.

This is the ship's third name - at least for part of it. As re-counted here in  Shipfax March 7, 2016
the ship was built as the tanker Polysunrise in 1981 then converted to a self-unloader with a new forebody in 2006 and renamed Baldock. When owners Klaveness decided to exit the CSL self-unloader pool, Algoma picked up the ship and hastily renamed it Algoma Value as of January 1, 2016. Now that the ship has been in Algoma service for a couple of years, they have had time to repaint it in Algoma colours. 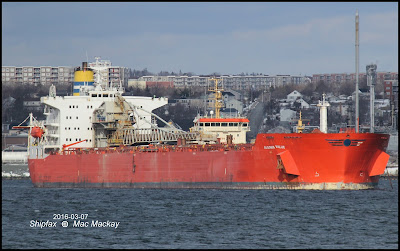 Still with remnants of its Klaveness colour scheme, Algoma Value bunkered at anchor in March 2016.

Its last port of call is listed as Montreal, but I can't confirm that (AIS is sometimes mistaken).