Perhaps by coincidence or perhaps with the coming of winter, both Melfi Marine and ZIM are changing out some ships on their Halifax routes.

Melfi, which trades between Europe and Cuba, with three ships on a 12 day rotation, has concluded charters for the ships Jona and Catharine Schulte

Its replacement is to be JPO Aries due on December 6, a larger ship at 2546 TEU. Both ships carry three 45 tonne capacity cranes.

Catharina Schulte, built in  2006 by STX Shipbuilding Co, Jinhae, with a capacity of 2602 TEU and four 45 tonne cranes, carried the name Cape Bon between 2006 and 2012. It arrived on Halifax on its Voyage 008 on November 14, but due to weather related congestion at Halterm, it moved from pier 41 to pier 36 to complete cargo work yesterday, then proceeded to anchor in Bedford Basin. A violent winter storm moving through the area was no doubt the cause.

It will be replaced by the Artemis a 2546 TEU ship,  with no cranes. I understood that ship's cranes were needed to handle cargo in Cuba, but perhaps they have shore cranes available. It's first scheduled call in Halifax is December 20.

The third ship on the Melfi service is Julius S [ see October 16, 2018 ] which made its first call August 27. It appears to be remaining with Melfi, although published schedules do not run past year end.

The new service started by ZIM in April, called Canada Florida Express (CFX) apparently does not call in Florida at all, but operates between Kingston, Jamaica, New York and Halifax as a feeder to ZIM's other services.  It has been operating two ships, AS Felicia and Arsos since it began. Both of those ships have now been replaced. 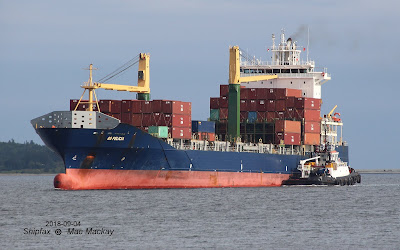 Its replacement, Jennifer Schepers arrived Thursday November 15 and sailed early November 16. A 21,108 grt, 25,775 dwt ship, it was built by Taizhou Kouan Shipbuilding Co (China Commerce Group). Taizhou in 2009 as Mistral Strait, but was renamed BF Copocabana on delivery, and carried that name until 2016. It has a capacity of 1795 TEU, including 319 reefers and has two 40 tonne cranes. [Weather did not co-operate with photo attempts.]


Its replacement will be RHL Agilitas due November 22, It has a capacity of 1732 TEU.

It appears that ZIM is increasing the capacity of ships on the service - a good sign, that perhaps as predicted, that there would not be a reduction in ZIM business in Halifax despite the loss of its traditional ZCS service, split between ZCX and slots on THE Alliance and 2M (MSC Maersk).

Not to be outdone in the replacement department Maersk Canada's Montreal Mediterranean Express (MMX) is also still bringing in short term charters. Jonni Ritscher was due yesterday but has opted to skip Halifax this time and is heading direct for Algeçiras from Montreal.

Speaking of skipping, Maersk / CMA CGM's Canada Atlantic Express (CAE) has also been skipping Halifax in recent weeks. Both the November 3 and November 10 ships were no shows, heading directly for north Europe, and no ship is currently scheduled for this weekend, as EM Kea was scheduled for November 18, and is en route directly to Europe. With Maersk Penang now due in Montreal on November 17 (it was anchored in the St.Lawrence until today) , it will now try to meet a November 24 target. Maersk Patras is in the eastern Atlantic, heading well south for the Azores to escape weather, and may still reach Montreal by November 26.

The extreme weather, now off Newfoundland will undoubtedly throw off a number of scheduled arrivals, and pilotage services are still suspended in Halifax tonight. A number of ships are also held in port awaiting clearance.

The bulker Centennial Harmony (92,752 grt, 181,338 dwt) heavily laden with iron ore from Sept-Iles for Port Talbot experienced flooding and main engine failure yesterday, 270 mi from St.John's. With seas of 18 to 20 meters and winds of 85 knots, there were fears that the ship would founder, and the crew even considered abandoning. However they were eventually able to make sufficient repairs to get underway again. A RCAF Hercules aircraft and CCGS Sir Wilfred Grenfell responded but there was little they could do to assist. 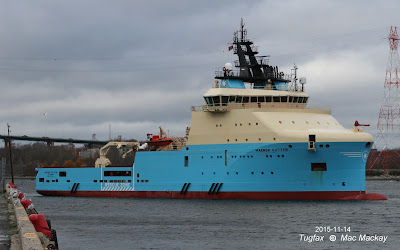 The tug / supplier  Maersk Cutter was 80 miles away standing by the FPSO Terra Nova and was prepared to assist if needed. However given the conditions it would have taken half a day or more to reach the ships, let alone make a towing connection or attempt to rescue crew.