Finale 2
It has been revealed by Halifax Shipping News that Algoma Tankers and Sterling Fuels, part of the McAsphalt / Miller Group, have not renewed their contract for the tanker Algoma Dartmouth. The deal, signed in January 2014, saw Sterling take over harbour fueling from Imperial Oil using the Algoma tanker. 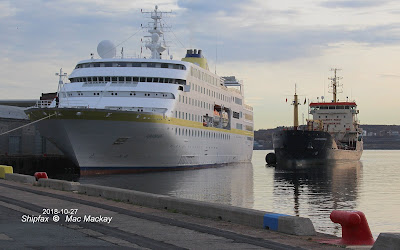 Algoma Dartmouth coming alongside Hamburg for refueling at pier 23.

Sterling has a bunkering tanker operation in Hamilton, ON and fuel depots in Windsor and Sarnia, ON. It also provides fuel by truck in those regions and in Halifax and that seems likely to continue. However not all ships that refuel here would be willing to pay for berthage and tugs in order to take fuel from trucks. Many of the ships are too large or too deeply laden to berth at Halifax piers. By my estimation about 30 ships took bunkers at anchor since January 1, 2018.

It is particularly awkward for cruise ships, where not all berths are set up for truck access. Fueling by tanker from the water side, also eliminates any cross traffic with passengers.

It is understood that Algoma Dartmouth will be moving to Saint John, NB, where it will work for Irving Oil. It will then be able to refuel many of the passenger ships that would have taken fuel in Halifax. It would also provide fuel for ships that had to come from Saint John to Halifax just to take fuel.

Other companies, including Irving Oil, provide bunker fuel in Halifax, and thus compete with Sterling. Irving Oil uses trucks and its Woodside marine terminal to deliver bunkering fuel, but likely only diesel fuel, not heavy fuel.

Wilson's Fuels has a pipeline to pier 9 from its storage tanks on Barrington Street and has been refueling the support ships that BP has been chartering for its oil exploration work. The pipeline is also used to bring in fuel, most recently from Come-by-Chance, NL, which would not include heavy fuel oil, but refined product.

Occasionally trucks from Quebec show up to fuel ships, likely from the Valero refinery in Lévis. However since the trucks are not marked for Valero, there is no way to be certain where the fuel comes from. Similarly the local tank truck operators Seaboard also deliver ship fuel, again anonymously.

Algoma Dartmouth has hardly been busy since it arrived here, sometimes sitting idle for many days  at a time. Recently I have noted the coaster Nolhan Ava - berthed at pier 36 - less than 100 feet away from Algoma Dartmouth is now taking fuel from a McAsphalt tanker truck. Other users include the Canadian Coast Guard and some naval ships. Other Canadian navy ships appear to be refueling at Irving Oil Woodside these days, so cruise ships have been the main customers this fall. With that season now ended, there will be a major drop off in business.

As a "full service port" Halifax has benefited from the waterside delivery of fuel, without the service it seems like another, albeit small, factor in making Halifax less attractive to shipping.

No announcement has been made by Imperial Oil or Sterling on whether they plan to acquire another tanker. My thinking is that if they had such plans something would have been said by now. However, their web site, at least as of today, continues to show Algoma Dartmouth and advertise fueling by tanker and by truck.

Since the takeover by Sterling the Algoma Dartmouth has been sourcing fuel from several locations. At first it was making trips to Point Tupper, NS to load fuel there and even made a trip to New York /New Jersey in early 2014.

Recently however Sterling gets its MDO (Marine Diesel Oil) from Imperial Oil at its terminal in Dartmouth. Imperial imports most if its refined product from Europe. Heavy fuel comes from Sterling's parent company McAsphalt, and is loaded at their dock in Eastern Passage. That material is mostly produced by Irving Oil at their Saint John refinery.

Since January 1, 2018 Algoma Dartmouth has refueled about 112 ships. Of those 44 have been cruise ships. The slowest month this year was February with only four calls for bunkers. September saw 24 and October had 26 refuelings. Of these 18 were cruise ships for each month. The average is one refueling every three days from January 1 until the end of October 31.

All of the cruise ships, 44 refuelings in all, with several ships refueling more than once, took bunkers while alongside.

My unofficial analysis indicates that the next largest source of work, after cruise ships, is from:
- ships sailing to or from Quebec ports such as Sept Iles, La Baie (Port Alfred) and the St.Lawrence River ports (about 19 ships), all taking bunkers while at anchor.
- tankers form a large part of the business with more than 25 vessels served, a few of which have already called in Saint John or are destined for Saint John. Others are St.Lawrence related and are included in the number above. Again all these were while the ships were anchored.
- container ships account for a small part of the work, with only four serviced, and these were relatively small spot charter ships.  Oceanex Sanderling has been served, but may also be refueling from trucks.
- miscellaneous ships in the breakdown include three CSL bulkers, and two cable ships.
It should be noted that these numbers are only approximate and are based on my own personal observations and records which are not exhaustive.

Larger shipping companies, particularly the container lines, working fixed routes, have long term fuel contracts with suppliers and usually take on fuel on pre-arranged schedules. Ships that are more or less tramping (no fixed routes) or are spot chartered, are more likely to need fuel before or after transatlantic trips. Halifax is well positioned for that business, but apparently there is not enough of it to justify the expense of a full time bunkering tanker. I reckon only about a dozen of the calls since January would fall into that category (aside from cruise ships).

It will also be interesting to see how operations in Saint John work out, since many of the ships calling there are anchored in an open roadstead, and conditions may make it difficult to service them.

Although Saint John has about half or less the number of cruise ships calls that Halifax does, they are almost all the same ships. So many of those that customarily bunker in Halifax could presumably do so in Saint John. Those that only call in Halifax could probably make do with truck delivery, depending on their berth.

It would seem that the basis for this move is that Algoma Tankers needed to find more work for its vessel, since it was sitting idle too much. Irving Oil perhaps felt that selling its heavy fuel directly to a user would be better business. However with new regulations regarding fuels, Marine Diesel Oil must be used by more and more ships. That could be another reason for the move, since Imperial must import all that fuel from abroad, whereas Irving has the capability to produce it locally (at least until the recent fire.) 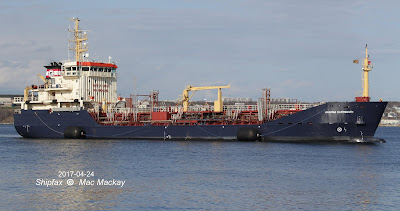 With fenders permanently deployed on the ship's starboard side, it returns from a bunkering assignment.

When Algoma Dartmouth (perhaps to be renamed?) sails, I will provide a potted history of bunkering in Halifax. It is currently at pier 9B undergoing some modifications for its new job. Due to its age (built in 2007) it must also be due for a drydocking. The last one was in January 2012 so perhaps this will be done at Shelburne en route to Saint John.