Bunkering in Halifax -another chapter


With the sailing on November 8, 2018 of Algoma Dartmouth for Saint John, NB to start a new bunkering operation in that port for Irving Oil, Halifax is without the services of a such a vessel for the first time.

It is probably impossible to say exactly when bunkering services were first introduced in Halifax, but it was likely early in the age of steam when ships arrived to take on coal as fuel. Coaling took place alongside, but also at anchor and barges or self-propelled vessels took coal out to the ships. That service lasted until the 1960s when oil became the fuel of choice.

During World War I Imperial Oil established a refinery on the eastern side of the harbour in the South Woodside area which came to be known as Imperoyal. The refinery produced fuel for many uses, including ship's fuel and was critical to the war effort, particularly in World War II.

Imperial Oil operated its own fleet of tankers and tank barges and used some of them to refuel ships in the harbour. In the early days of this century Imperial sold off its tanker fleet, including eventually the bunkering tanker Imperial Dartmouth. It was sold to Northern Transportation Co Ltd and operated in Halifax as NT Dartmouth from 2006 to 2009.

When NTCL took over Imperial Dartmouth and renamed it, they repainted the ship green. However in its last few months in Halifax, from May 2009 it was painted red.

In 2009 Algoma Tankers acquired the Turkish built bunkering tanker Samistal Due and renamed it  Algoma Dartmouth. Built in 2007 by Yardimci Gemi Insa SA of Tuzla, it was to be called Crescent Bardolino, but was delivered as Clipper Bardolino and carried that name until 2008 when it was sold by Clipper Wonsild Tankers (UK) Ltd to Samistal Shipping Ltd of Turkey.

It was reported at the time that Algoma and Imperial Oil had a three year agreement. As of August 1, 2009 Algoma operated the tanker with a coasting license as a charter, but under the Canadian flag as a "non-duty paid" vessel until July 31, 2010. However by January 2010 Algoma had purchased the ship. 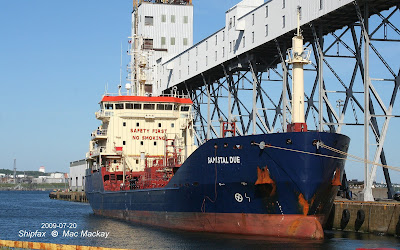 On the same day as the previous photo, Samistal Due was tied up at pier 25 being prepared to take up its duties. It was registered in Canada, the next day, July 21, 2009, under its new name.

Specially built as a bunkering and chemical tanker with heated tanks to carry heavy fuel, and twin screws for close quarters work, it measured 2999 grt, 3569 dwt.

In September 2013 Imperial Oil shut down the refinery, eliminating a local source of bunker C, the heavy fuel oil used by many ships. In January 2014 Sterling Fuels of Windsor, ON, part of the McAsphalt / Miller group of companies took over the charter. Sterling provides bunkering facilities in Hamilton, Windsor and Sarnia, ON and McAsphalt has an asphalt depot in Eastern Passage, and supplemented these facilities to store heated heavy oil for marine fuel.

They apparently maintained a source of diesel fuel with Imperial Oil, which continued to store and distribute refined product from its Imperoyal location. However they have also found fuel in Point Tupper, the United States and even from Irving Oil in Dartmouth.

My post of November 29, 2013 was made before the contract with Sterling Fuel had been announced, and gives an overview of bunkering in Halifax up until then: http://shipfax.blogspot.com/2013/11/bunkering-in-halifax.html

Interestingly the last refueling conducted by Algoma Dartmouth appears to have been on Oceanex Sanderling on October 31, 2018, just as it was in 2013 before the Sterling charter.

Now just weeks short of five years later we are in the dark as to the future of bunkering by barge or ship. Several companies do provide marine fuels in Halifax by truck, but that requires ships to tie up at a pier. 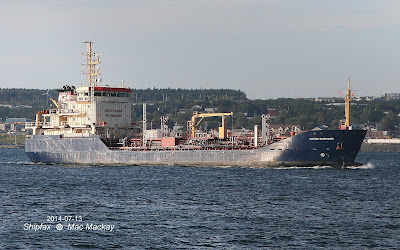 In this 2014 photo the Algoma Dartmouth had moved its fenders to the port side but they would usually be on the starboard side.

Since 2009 Algoma Dartmouth has been a fixture in Halifax harbour and perhaps it was taken for granted that it would be here indefinitely. 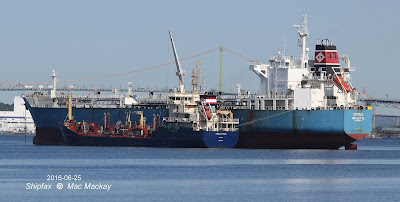 A typical scene, with Algoma Dartmouth alongside and refueling a tanker.