Another boisterous day on Halifax harbour, and there was only one commercial arrival and no departures. Some ships that were due today have delayed arrival until tomorrow when things are expected to calm down.,

In the harbour traffic was limited to the usual ferry crossings between Halifax and Dartmouth, with Halifax Transit's newest vessel Rita Joe doing the honours. The boat was completed by A.F.Thériault in late September and arrived in Halifax ca. September 30. Although it entered service about October 22, it was not officially welcomed into the fleet until a ceremony on October 26. 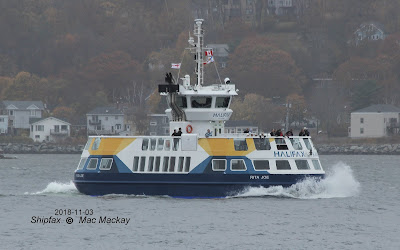 Passengers enjoy a splashy trip from Dartmouth to Halifax.
It is the last of the five boat replacement fleet built since 2014, and means that Woodside I, built in 1986, has been removed from service. Both Dartmouth III and Halifax III have been sold to Toronto Island Transit Services Inc, with the first named delivered to Toronto last year, and the second still sitting in Sambro, NS awaiting delivery.

In the murky reaches of anchorage number 2, at the entrance to Eastern Passage, CCGS Sir William Alexander and CCGC Sambro, with a number of CCG RHIBs were conducting a Search and Rescue exercise, well beyond clear camera range from Halifax.

At HMC Dockyard HMCS Windsor was enjoying shore leave so to speak, on the synchrolift. The sub was away from Halifax all summer and is no doubt in need of some maintenance. 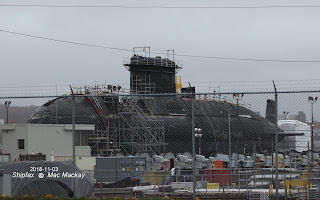 A white tent structure erected astern may be related to prop work.

Today's one arrival, San Adriano appears to have moved up a day, to allow for tomorrow's arrival at Halterm, CMA CGM Amazon, a 9288 TEU ship that would be unwieldy to berth in today's windy conditions.