With Maersk reportedly winding down its MMX service (Mediterranean to Montreal westbound and return eastbound via Halifax) the regular ships have been reassigned and odd ships are in place for the last few calls.
Today's arrival, Claes Maersk is a veritable antique amongst container ships.

An early morning arrival on a gloomy day for Claes Maersk.

Built in 1994 by Odense Steel Shipyard in Odense, Denmark (at the time owned by Maersk, but since shut down) the ship is equipped with a 45 tonne capacity traveling gantry - something not seen on new container ships in this century. With a gross tonnage of 20,842 and deadweight of 28,500 it has a relatively small capacity of 1750 TEU including 164 reefers.

The ship's registry was shifted earlier this year from Denmark to Hong Kong and the ship is now owned by  Maersk Shipping Hong Kong. It was previously operating a shuttle on the Red Sea between Saudi Arabian ports.

It is interesting to note that there are no containers stowed on deck under the crane, and containers stowed immediately forward and aft of the crane are only three high, which would allow the crane to move. With Halterm 's pier 41 and 42 occupied (by CMA CGM Tage and Julius- M respectively) the ship docked at pier 36 where there is only one shore crane, so perhaps the gantry crane will be put to use.

The camera flattens waves, but it was quite choppy and breezy in the harbour this morning and the tug Atlantic Bear made quite a splash when it went out to join the ship as second tug. 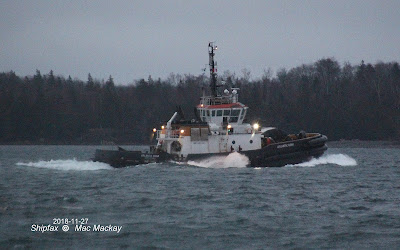