As the penultimate cruise ship day for the 2018 season, Halifax greeted the Seven Seas Navigator. The last day of the season will be November 6 with both Insignia and Silver Wind scheduled. However for today visitors were "treated" to a good old pea souper that developed as the morning wore on. Passengers were seen emerging with complimentary blue brollies and boarding buses for sites that may also be almost invisible. 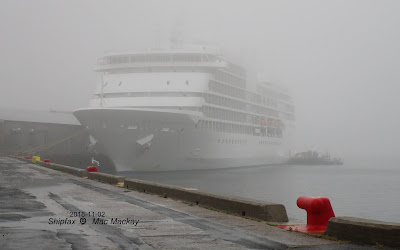 Essentially the same scene as my October 23 post, minus the wind - plus the fog
(and a supervising gull.)

The late days of this season have brought frightful weather which goes some way to explaining why there have not been many posts lately.