The former protest ship Farley Mowat that was in the news for years during its prolonged demolition process, is back in the news again. Bridgewater sculptor Brian MacNevin has preserved a portion of the ship on his front lawn. Despite complaints about the piece, Bridgewater town council has allowed the fragment to remain with some improvements for safety and accessibility. 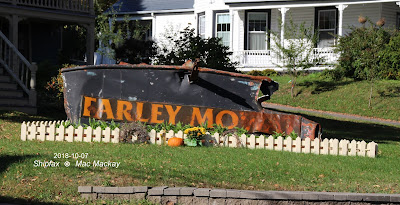 The portion of Farley Mowat installed in Bridgewater.


The ship itself, built in 1958 in Norway  as a fisheries patrol boat, went on to a career in offshore standby before it was acquired by the Sea Shepherd Society in 1997. It carried the names Sea Shepherd, and Ocean Warrior before taking the name Farley Mowat in 2002. 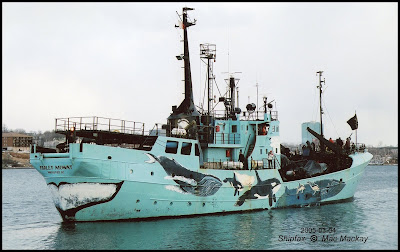 In its early years as Farley Mowat the ship sported whale graphics.

The ship participated in numerous anti-sealing and anti-whaling protests, with the resultant brushes with authorities. It was finally detained in Sydney in 2008 and sold at auction in 2009. A plan to use it for ocean cleanup fell through and the ship languished in Lunenburg where it was sold at auction again, in 2013. The buyer began to scrap the ship but it was a stop and go process, with the ship ending up in Shelburne. The scrapper was fined and jailed and the ship sank at its berth. Eventually the government stepped in,  raised the ship and arranged for its tow to Liverpool where it was finally broken up in 2017. 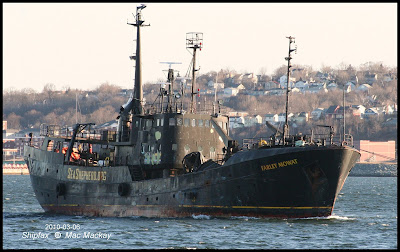 Under tow for Lunenburg in 2010, the ship was wearing its black "stealth" paint job.

Farley Mowat himself, a noted Canadian author and early environmentalist, is well remembered by ship enthusiasts for a trio of engaging sea stories. Grey Seas Under,  The Serpent's Coil, and The Boat Who Wouldn't Float are classics on many book shelves. However his environmental and ethnological works were better known and influential. Mowat, never shy of controversy, was an appropriate namesake for a ship that sailed into issues at full steam. 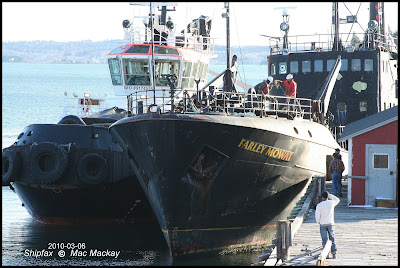 On arrival in Lunenburg in tow of Atlantic Spruce, the ship's port bow name plate appears in situ.