A passenger train derailment this morning blocked off rail access to the Halterm container terminal. Some backlog of inbound rail cars is expected, but judging by the speed at which CN has responded to the incident it is unlikely that there will be any significant effect on the port. 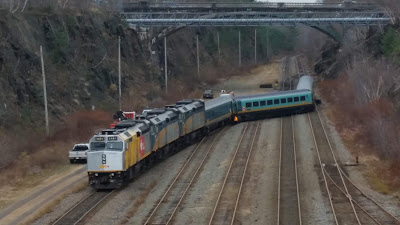 VIA rail operates a passenger rail service, using CN tracks that serve Halterm, the deepwater piers, a large rail yard, the grain elevator, P&H Milling and the passenger station.
Passenger trains arrive at the station "head first". Before departing again they back out of the station and use the balloon track through Halterm to turn the entire train around. Then they back into the station ready for departure. In preparation for today's departure the train had backed out of the station and was entering the lead to Halterm when three cars left the rails. The engines were apparently not effected as it appears the second car "picked" the switch, and tried to go straight instead of following the lead. 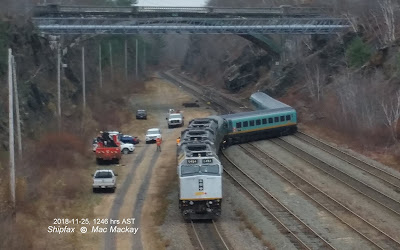 Today's passenger train departure was therefore cancelled, and when I arrived on site (at the normal departure time) the cars that remained on the rails had been hauled off to another CN rail yard, but the three locomotives and derailed cars were blocking all tracks, both for passenger and freight trains.

Later in the afternoon CN had brought in equipment from as far away as Truro and had hired a crane and other equipment to remove the cars. It appears that there will be considerable work in rebuilding the switches and rails in the area before the tracks can be opened up to traffic again. Crews seem prepared to work all night to restore the track and permit freight cars to move into the ocean terminals and Halterm. 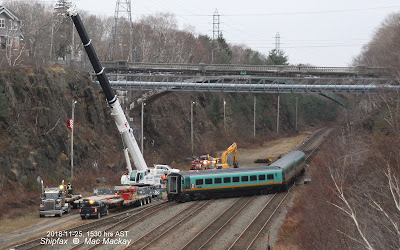 Photos were taken from the Young Avenue bridge looking (CN) west toward the Tower Road bridge and the rail cut. Halterm is behind me.

This is the rail cut that some are proposing as a dual purpose route for trucks and trains to get truck traffic off downtown streets. Although built with tax payers' money it it is now owned by CN, who are understandably lukewarm on the idea.