The shortage of Canadian tankers continues, with both Algoma and Pétro-Nav unable to meet demand with their current fleets.

Algoma has just recently purchased the Swedish tanker Ramira, and renamed it Algonorth It is due in Montreal on November 28 giving it a few weeks service before the Seaway closes. The ship was registered in Halifax November 9 so it is possible that we may see it this winter. Built in  2008 by Tuzla Gemi, in Turkey, the 12,146 grt, 16,979 dwt ship carried the name Gan-Gesture for one year before going to Sweden.

Pétro-Nav citing delays to its current fleet because of severe ice conditions in the north and bad weather recently, has applied for another coasting license for the tanker Tasing Swan. The Danish flag vessel of 7232 grt, 11,319 dwt is also Turkish built, dating from 2007 at Istanbul Dockyard. The former Hamza Efe Bay to 2008 and Erria Mae to 2012, has been granted at least two coasting licenses and an extension  on behalf of Pétro-Nav already this year. It is one of up to half a dozen tankers Pétro-Nav has chartered this year to service the needs of the Valero refniery in Lévis, QC. 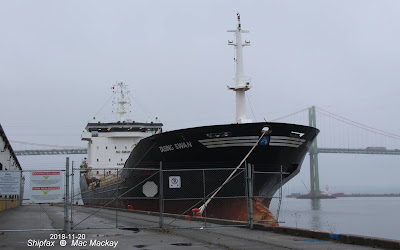 With the expiry of its latest license November 20, the ship is lying at pier 9B in Halifax awaiting a new license.

Irving Oil on the other hand seems to be able to split loads for its foreign tankers dropping off part loads at various Canadian ports. Their Iver Prosperity arrived at the Woodside terminal today from Saint John. The Marshal Island flagged ship was built in 2007 by Hyundai Mipo, Ulsan and is the same class as their named fleet, at 23,421 grt, 37,456 dwt.

Word has reached me that Maersk is halting it Mediterranean / Montreal service MMX. The short lived operation began August 1. The last caller will apparently be Maersk Niteroi December 4 - that is about one week behind schedule. It is possible the route may start up again in the spring.

The Canada Atlantic Express will continue however.

Today's arrival ON THE MMX SERVICE was a bit unusual. Safmarine Cameroun is a 24,488 grt, 28,936 dwt geared container ship with a 2096 TEU capacity, including 340 reefers, Its three cranes are rated at 48 tonnes - fairly heavy for a container ship. Safmarine Container Lines NV was acquired by Maersk from its South African owners in 1999, but has retained its brand identity. Since 2011 its operations have been integrated within Maersk, giving the parent company the flexibility to move ships around as needed. As a result several Safmarine ships work for Maersk on various services. 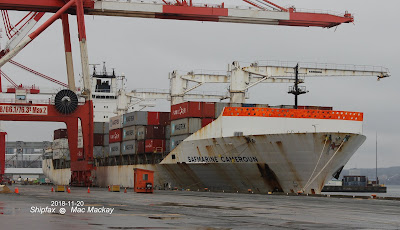 Safmarine Cameroun dates from 2004 when it was delivered by Volkswerft Gmbh, Stalsund, Germany, as the first of three sister ships. The former East German shipyard was once the largest trawler builder in the world, with production dedicated to the USSR. With the fall of the Berlin wall, the yard was privatized in 1990, and Maersk purchased the operation in 1998. In 2016 they sold the yard to Hong Kong investors.