The second of two new US Navy Littoral Combat Ships arrived in Halifax this morning despite reports that it had cancelled its visit. USS Wichita LCS-13 arrived just after sunrise, in much better conditions than its sister ship USS Sioux City that arrived in driving rain and fog November 6. (It sailed after dark on November 7). 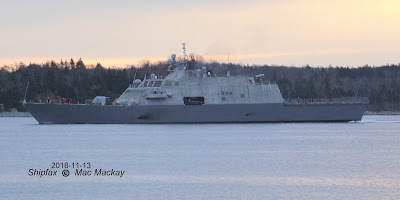 Both ships were built by Lockheed Martin / Fincantieri Marinette Marine in Wisconsin, and delivered to the USN on August 22. It is certainly unusual that two warships would be handed over simultaneously, particularly since their keels were laid a year apart.

It is apparent from those dates that the latter ship still requires some work, but that it was important to get it out of the Great Lakes before freeze up. The experience with USS Little Rock last year when it was trapped in Montreal for the winter is apparently a "lesson learned".

Reports that Wichita would not be calling in Halifax may have had to do with its projected arrival date coinciding with Remembrance Day. However the ship made a leisurely tour down the St.Lawrence River, at a sedate cruising speed rarely exceeding 14 knots when I could track it. It then presumably performed some trials either in the Gulf or in the Atlantic, since it took five days to reach here from Montreal. (Sioux City took the more normal three days.)

The ships of this class have generally topped up on fuel in Detroit and again while in Halifax, despite having a cruising range of 3,500 miles at 18 knots ( = 21 days). Maximum speed is reported to be 45 knots, which would reduce the range substantially if they carried out speed trials while en route.