Locally based Rosborough Boats dates back to 1955 when the founder began to refit then build custom wooden sailing yachts. In the 1970s the company found that there was an untapped market for semi-custom vessels for government agencies to be used for enforcement, patrol and survey work.  They have since produced a wide range of craft from open RHIB types (Rigid Hull Inflatable Boats) to hulls with solid walls and decks and RHIB type D collars, called Wings.

The company now does business world wide, but is still family owned and based in Halifax.

On Friday, July 26 I noted a newer model of Rosborough's "Roughwater" [TM] series operated by Canadian Border Services. While the cabin looked familiar, the bow was much shorter, and the collar did not extend the full length of the rigid hull. There is no boat that looks like this on on Rosborough's web site: http://www.rosboroughboats.com/ 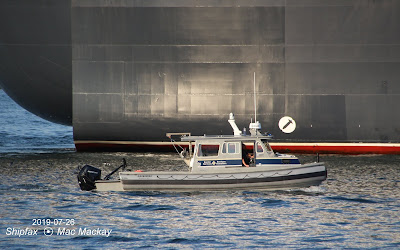 The unnamed and unnumbered boat was giving close escort to Queen Mary 2. (Note the "Azipod" symbol on the big ship's side - also the large blotches of scaled steel.) 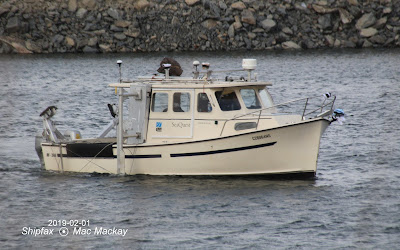