It was quiet in the harbour for the July1 holiday, but things picked up a bit today.

Irving Oil welcomed the tanker Elka Hercules from Amsterdam. This is the ship's second call in Halifax. It was here January 29 to February 1, also from Amsterdam, with a cargo of refined product. Its visit will be a short one as it has to vacate the berth tomorrow for the arrival of Irving's Acadian.

A 2002 product of Brodosplit shipyard in Croatia it is a 27,539gt, 44,481 dwt MidRange tanker. It is part of the European Product Carriers Ltd fleet from Athens, and one of about twenty ships with the "Elka" prefix, several of which have called here recently.

The autocarrier Hoegh London made a brief call at Autoport this morning. This is the ship's first visit to Halifax according to my records. It is on an eastbound routing, so may have loaded export cargo.

Hoegh London has a side ramp positioned well aft. Most autocarriers have them nearer midships.
The pilot boarding door is just forward of the ramp.

Built by Daewoo, Okpo in 2008 it carried the name Alliance Charleston from 2010 to 2013 and flew the US flag as a non-Jones Act vessel. As a ship not built in the US, it was not permitted to trade between US ports, but was eligible for certain preferences in foreign trade, such as US government cargo.
The 68,871 gt, 27,100 dwt ship has a capacity of 7850 CEU.

It was an unusual mid-day arrival for Oceanex Sanderling returning from St.John's. The ship sailed from Halifax on Friday as usual but must have done a quick Sunday turnaround in St.John's to avoid the holiday.

The ship is carrying a large number of Oceanex (blue) 53 foot containers. These are among the few "sea going" 53 footers, as most container ships can't accommodate them in their cellular holds. Therefore most 53 foot containers are not built to IMO sea-going standards, and are restricted to intermodal or RoRo traffic.

Queen Mary 2 made a return call today. With Celebrity Summit overnighting at pier 20, the big ship berthed at pier 22, and had to extend lines across the camber to pier 26 in order to be properly secured. 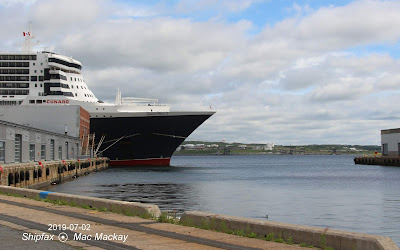 It is not only container ships that are getting bigger! The port has to accommodate some large cruise ships too, and with three in port today, Insignia had to take the back seat - at pier 27 - in amongst a lot of unsightly commercial port activity. If I were a tourist I would not be impressed.

Queen Mary 2 made its stately way out of Halifax this evening nicely catching the sun on its way to the pilot station.

To make room for tour boats at the Tall Ships Quay, the yacht Sycara V shifted north to the Salter pier, and appeared to be undergoing some maintenance. There may have been divers working at the bow. Note the hatch doors open at the forepeak. 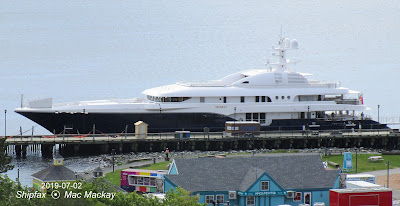