This year July 4 celebrations in Washington, DC, featured an exhibit of US military might reminiscent of the many Kremlin displays of yore.

In a much lower key, the US showed the flag in Halifax today, with the arrival of USS Billings * LCS-15 the latest in a series of Littoral Combat Ships. On its delivery from the Marinettte Marine shipyard in Wisconsin, the ship is the eighth in a series of sixteen to be built at the yard. Another series of a different design, carrying even numbers is under construction in Mobile, AB to be based in San Diego. Although not commissioned yet, the ship carries a naval crew, and likely some civilian technicians, on what is in effect a shakedown voyage en route to its home port of Mayport, FL.

Festooned with rubber fenders the ship transited the St.Lawrence Seaway June 17 escorted, and sometimes towed, by the tug Ocean Echo II and tied up in Montreal for a courtesy visit. In getting away from the berth June 21 the ship came in contact with the cargo ship Rosaire A. Desgagnés that was tied up ahead. It is apparent that wind and the strong Ste-Marie current swept the Billlings into the stationery ship.

Damage was apparently superficial to both ships, but Billings returned to a berth and on June 27 the ship's commander was removed due to "loss of confidence in his ability to command." This is almost certainly a career-ender for the officer.

After a complete damage assessment the ship left Montreal July 1 and sailed directly for Halifax. 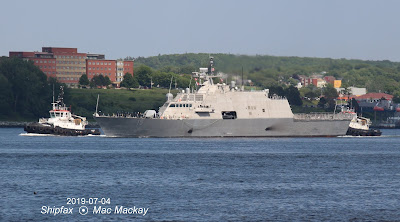 There have been several incidents involving these ships on their delivery trips, including the LCS-9 Little Rock that was forced to winter over in Montreal when ice formed in the St.Lawrence.

All eight of the Marinette built ships have called in Halifax on their delivery trips.

The LCS program has been highly controversial, as have most new naval vessel contracts.
Wikipedia offers this summary: https://en.wikipedia.org/wiki/Littoral_combat_ship


*ADDENDUM -thanks to commentator-see below - it is not USS yet!