Irving Shipbuilding Inc has applied for a coasting license to use the semi-submersible Boa Barge 37 to launch the second of the Arctic Offshore Patrol Vessels. The license period is from October 18 to November 19, 2019.

Halifax Shipyard has no floating drydock anymore, and has instead chartered the big Norwegian barge for use as a launch platform. As a foreign flag vessel, it is required to have a coasting license to work in Canadian waters. Coasting licenses may be issued by the government of Canada if no suitable Canadian vessel is available. 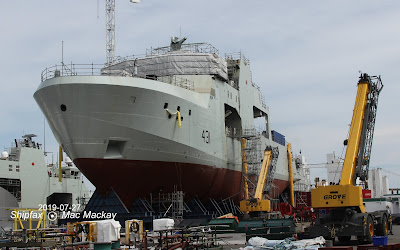 AOPV #2, the future HMCS Margaret Brooke is currently assembling on the hard stand at pier 6 -8 while AOPV #1 (future HMCS Harry DeWolf) is fitting out alongside. It was launched from the same barge  in September 2018. The barge has the capacity to lift the ship, along with its cradles and the 232 line axle SPMTs used to transport the ship from land to the barge. The estimated weight is 7,129.5 metric tonnes.

Although no statement has been made about last year's launch I think there were ballasting issues, as the barge did not submerge evenly. It will be interesting to see if this year's launch goes differently. 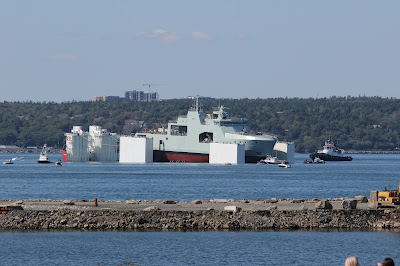