A rare visitor has been working in and out of Halifax for the last week or so. CCGS Frederick G. Creed is a hydrographic survey vessel, normally based in Rimouski, QC. However it works the length and breadth of the St.Lawrence River and Gulf and makes occasional forays into the Atlantic. 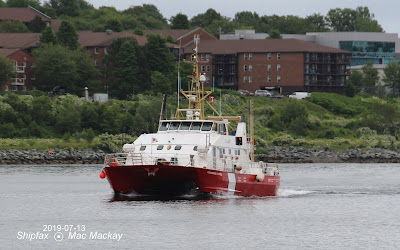 It is a SWATH vessel (Small Waterplane Area Twin Hull), a hull form patented by Nova Scotia native Frederick G. Creed. Read more about it in this previous post:  http://shipfax.blogspot.com/2013/05/fgs-planet-swath-has-nova-scotia-roots.html 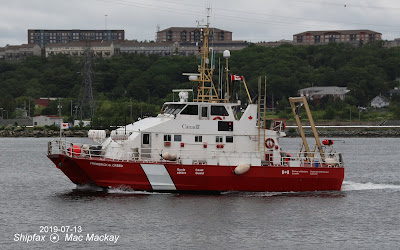 Despite its diminutive size (152 gt) the vessel provides an extremely stable platform for the delicate work of charting. Built in 1988 by SWATH Ocean Systems Inc in San Diego, CA, the ship appears to be holding up extremely well for its age. It has certainly received numerous upgrades, some of which are apparent by comparing today's photo with the 1994 and 2013 photos on the previous post. It appears to have a larger stern gantry now, not to mention numerous satellite and other communication devices.