HMCS Halifax back to port

After an overnight sea trial HMCS Halifax crept back into port late this morning and tied up at HMC Dockyard.

Wearing the NATO badge on its bridge wing, HMCS Halifax re-enters its home port at a very slow speed late this morning.

I speculated yesterday that repairs to an oil seal in one of the turbine compartments had been repaired, but apparently it is not yet ready to join its NATO mission in the Mediterranean. Certainly things happen on ships, but this must be a bit of an embarrassment for a ship that has been working up for this operation for some months.

Navy sources have given no time line for completion of repairs, but I am sure after recent publicity about the 2004 fire aboard HMCS Chicoutimi that they are taking extra precautions. The cause of the fire was determined to be the crew's failure to follow standard operating procedures by leaving hatches open. The resulting ingress of water caused an electrical short and fire that gutted much of the interior of the boat. 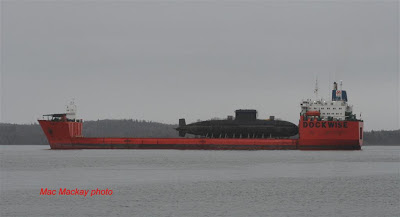 HMCS Chicoutimi, on the heavy lift ship Tern April 5, 2009 for transfer to the west coast and rebuilding.

That fire aboard the ex RN submarine Upholder on its delivery trip to Canada resulted in the loss of one life and serious long term health consequences for most if not all of the rest of the crew. Since repaired and rebuilt, HMCS Chicoutimi is based on the west coast.
.