The issue of ship scrapping has raised its ugly head again with the arrival off  destination of Alang India of the former CN Marine / Marine Atlantic ferry Sir Robert Bond. The likely presence of contaminants may be the reason that the ship was towed is under tow to India instead of the much closer scrapyards in Turkey. With the assistance of some shipowners, notably Maersk, several Indian scrapyards have improved their practises to meet an international standard. However there are still many yards in Alang that have no responsible programs for handling contaminants and for the safety of workers.
[the ships is still off South Africa and has not yet passed the Cape of Good Hope]

Most Canadian ships going overseas for scrap recently (and there have been two so far this year) have been going to Turkey where the breakers are equipped to handle the safe removal of hazardous materials and have a much better record for worker safety. 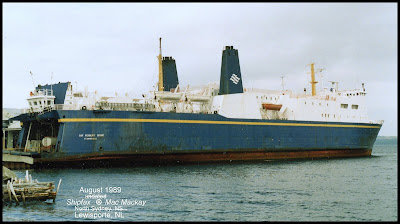 A ship of the age of the Sir Robert Bond can be expected to contain such materials as asbestos, lead paint and PCBs, and as such there are restrictions on exporting hazardous materials from Canada. However these rules are often thwarted by means of sales through third parties. The new buyers re-register the ships under a flag of convenience and appear to be prepared to re-use the ship, but it ends up in the scrapyard instead.


The complicated trail of ownership of the Sir Robert Bond (renamed Bond) for the tow to India, on the surface certainly appears to follow that method. When the ship left Canada in tow of the tug Nove it was reported to be heading to a shipyard to complete a refit that was suspended when the shipyard in Newfoundland went bankrupt. However some people familiar with the ship stated that it was beyond repair. The main engine had been dismantled and could not be rebuilt to meet current emission standards without significant upgrades.

This is the second ship that was to have been rebuilt to carry peat moss to the United States. In both cases work to refit the ships was suspended and both were scrapped. In the first case the Canadian government had to step in and secure the ship. In this case the ship was apparently cleared to sail without any over sight.

The question now is whether the owners of the Bond had proper clearances in place to export the ship, and if not whether there is any action the government can take. Recent instances of hazardous wastes exported to the Philippines and Malaysia under the guise of recyclables, and mislabeled meat products indicates there is a lack of export control in Canada. This has left the country open to repercussions and tarnished our reputation abroad (unless it is for naiveté).