June in Halifax can be foggy and wet or mild and sunny. This year it was the former. Coupled with the usual summer dearth of interesting shipping, the port resembles the doldrums.

That intertropical convergence zone usually found between 5 degrees north and 5 degrees south latitude has been the subject of legend, not to mention Coleridge's Rime of the Ancient Mariner where:
Day after day, day after day
We stuck, nor breath nor motion
As idle as a painted ship
Upon a painted ocean.

Nothing so picturesque is happening in Halifax, with the ordinary arrivals and departures of scheduled ships, the intermittent visit of a typical MidRange tanker, punctuated by random cruise ships, it really is the slow season.

One tanker called in at Imperial Oil this week, Platytera arrived June 28 from Amsterdam and sailed again today for the same port. 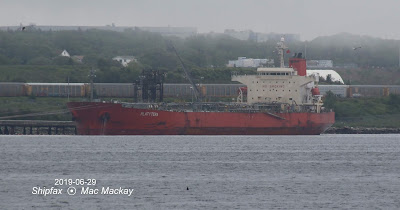 Built in 2009 by Onomichi Zosen in Japan, the 26,900 gt, 47,401 dwt vessel flies the Maltese flag for the perfectly anonymous Dax Shipping. That anonymity extends to the orangey hull and featureless funnel of the same colour. The only giveaway is the obviously Greek name:
https://orthodoxwiki.org/Panagia_Platytera
The ship's technical managers, Executive Ship Management, are slightly better known, but are based in Singapore:
http://www.executiveship.com/ 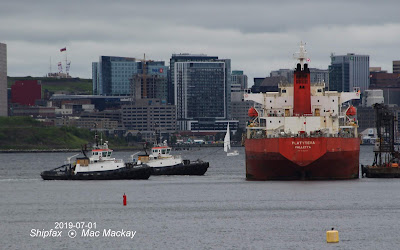 Getting away today with the assistance of Atlantic Fir and Atlantic Oak , Platytera signaled a warning blast to a passing sailboat - which was largely ignored. In the background Citadel Hill was in Full Dress for Canada Day.

It turned into a damp experience for passengers from Celebrity Summit despite all the events planned to mark Canada's 152nd birthday. The superyacht Sycara V moored nearby was the subject a previous post.

Also flying the Maltese flag, Celebrity Summit emerged from Chantiers de l'Atlantique in St-Nazaire in 2001 as Summit. The 90,940 gt ship is powered by gas turbines, (a supposedly more environmentally friendly option than diesels) driving electric azipods. The ship was renamed in 2008 and has had several makeovers, the most recent earlier this year. That refit included re-doing all the cabins and adding 30 more to give a capacity of 2,218 in double occupancy. The crew numbers 999.

The lack of excitement in Halifax harbour has meant that Shipfax has been unusually quiet of late. That may continue for a time!