A new to Halifax container ships arrived early this morning. Northern Guard sailing for THE Alliance is eastbound, and did not call here westbound, so may have picked up the spot in the rotation by starting in the US.

From its somewhat shabby appearance, it appears that the ship may have been laid up for time or employed on short spot market charters.

The ship was built in 2008 by Hyundai Mipo, Ulsan with a 4294 TEU (including 400 reefers) capacity. At 41,835 gt, 53,870 dwt, it is now considered to be an uneconomic type. Too large to be a feeder ship and too small for most major routes, it has been displaced by larger ships. From 2008 until 2013 it sailed for Hamburg-Sud as Cap Graham. The ship wears the funnel markings of Norddeutsche Reederei H. Schuldt, one of many owners now tied into the V-Ships conglomerate, which provides technical management for more than 2200 ships. Commercially, the ship is managed by Blue Net Chartering a broker for more than 270 container vessels, all German owned.

By late afternoon it was a waiting game for the NYK Line autocarrier Graceful Leader, as it sat in the lower harbour awaiting the berth at Autoport.

Graceful Leader, with tugs alongside, remained stationary in the lower harbour for nearly an hour.

Meanwhile the Eukor car carrier Morning Cecilie had delayed its original departure time. Once it was well underway Graceful Leader was able to move into the berth at Autoport. 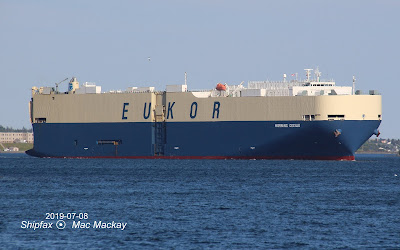