Sing a little Industrial Song for me

The much traveled Industrial Song made its arrival in Halifax this evening. The ship was in the St.Lawrence Seaway upbound on June 20 and reached Duluth, MN where it unloaded wind turbine components June 26 to 28. When it sailed from there it gave Halifax as its destination.

On arrival today both CCGS Sir William Alexander and CCGS Edward Cornwallis were outbound, so Industrial Song took the western channel, giving the two CCG ships lots of room in the main channel. 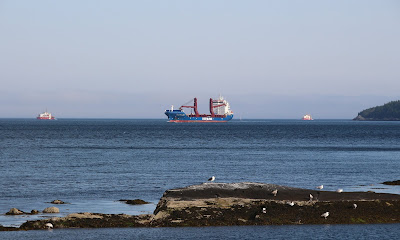 However with the number of pleasure boats present it was not completely clear sailing. The ship had to sound it signal on two occasions - once five times and once twice, to alert small craft to move away. 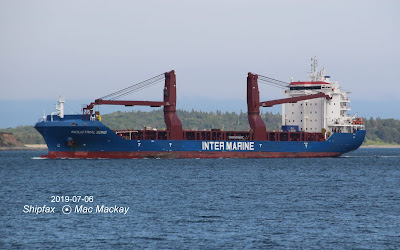 The heavy lift ship, built in 2017 by Huanghai Shipbuilding Co in Rongcheng, China, carries a pair of 250 tonne capacity cranes that can work together for a 500 tonne lift. The ship, operated by Jungerhans Heavy Lift, under the Intermarine banner, measures 11,619gt, 12,337 dwt.

The reason for its arrival in Halifax is still unclear. It tied up at pier 27, but there were no fuel trucks waiting for it, so it may have some below deck cargo to offload.