Easter Passage - something new for Autoport and more asphalt- UPDATED

Instead of the behemoth 6,000 to 8,000 car capacity auto carriers we usually see, today's caller at Autoport is the relatively tiny Viking Constanza, with a capacity of 2,000 cars. 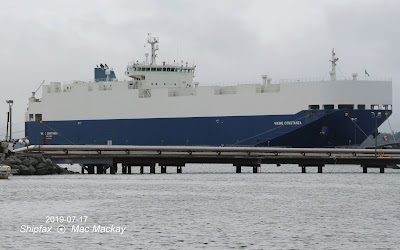 Ships of this size are usually found on short sea routes within Europe or Asia, and it seems that this may be a short sea voyage also. The ship's last call was Vera Cruz, Mexico, indicating that it has a cargo of Mexican made cars, and possibly some buses.

The ship was built in 2010 by Sumitomo at their Kyokuyo Shipyard and has tonnages of 20,209 gt, 5496 dwt. It is equipped with one hoistable deck and can carry some "high and heavy" cargo in addition to typical cars.

Meanwhile at the adjacent dock, owned by McAsphalt Industries, the integrated tug/tanker barge Leo A. McArthur / John J. Carrick * is unloading a cargo of asphalt.

Modernization of the former Dook's dock is still underway and the Municipal Enterprises Ltd barge, the former cable ferry La Have II is tied up inside the dock.

Built by Penglai Bohai in China in 2007 the pair are built for ocean work, but are more usually found working in the St.Lawrence Seaway between Tracy, QC and Sarnia, ON and numerous ports between. The barge has a capacity of 70,000 bbls and is equipped with a heating system to keep the cargo pumpable.

Named for the founders of McAsphalt Industries (in 1970) the pair are also ice strengthened, and have been known to work through the winter on the Great Lakes. They arrived in Canada for the first time September 9, 2009. and went into service for McAsphalt Marine Transportation. 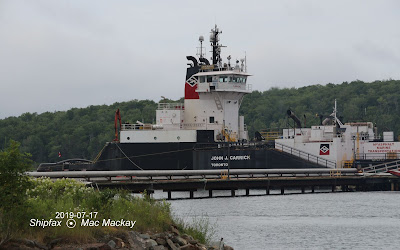 The tug is connected to the barge by an Articouple system that allows it to detach, but rarely needs to do so.


The tug was initially named Victorious when it was managed by ULS Group (Upper Lakes Shipping) but was renamed when McAsphalt took over direct management with McAsphalt Marine Transportation Ltd. McAsphalt acquired the Miller paving company in 1977.

-----
* Transport Canada's ship registry shows a period after the initial in the tug's name, but not in the barge's name. However there is a period on the barge itself.
-----

Bonus Round
On departure this afternoon Viking Constanza revealed another unsual aspect of the ship that was not obvious from the previous photo. 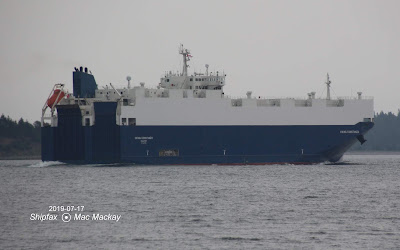 The ship has two stern ramps, one straight ramp and one on the quarter. This feature allows the ship to dock at a variety of facilities, and in some circumstances might even allow the ship to use both ramps at once. Also of note, the ship's bridge is aft of midships.

The ship seems to be a bit of a speedster, as it was making a lot of engine noise, and throwing up a bit of a rooster tail. Once clear of the harbour and heading south (destination New York) it was clocked in excess of 18 knots.
Posted by Mac at 1:41 PM