Before setting out upon a road trip to Quebec, I did a final look round the harbour today.

At Imperial Oil's number 3 dock the Largo Mariner was at work unloading a cargo of refined product from Antwerp. 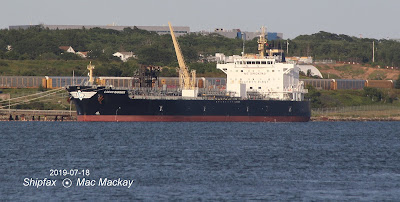 This is the second ship recently that was built by the Hyundai Vinashin Shipyard in Ninh Hoa, Vietnam (High Challenge was here on July 14- [qv]). This one dates from 2018 when it was built as Desert Mariner but was renamed on delivery, with a double change of ownership on the same day. This is a reminder (if we needed one) that ships are commodities, much like their cargo, and can be traded or sold for business reasons. Mid Range tankers, such as this one at 20,407 gt, 49,992 dwt are the work horses of the "clean" (i.e. refined) product business and are operating more profitably than other shipping sectors at this time.

Current owners, listed are Meridian 15 Ltd, but interestingly managers are Cargill Ocean Transportation, the shipping arm of the giant grain trading business. With about 570 dry cargo bulk carriers under it control, it also has a small position in tankers. Cargill expects to have some twenty tankers (all chartered) in its fleet by next year.

A familiar ship appeared at National Gypsum today, but in a new guise. Algoma Verity is the new name hastily applied to the former Alice Oldendorff, one of three ships recently acquired by Algoma when Oldendorff Carriers withdrew from the CSL self-unloader pool. Klaveness exited the pool a few years ago, leaving only CSL Americas and Algoma as members. 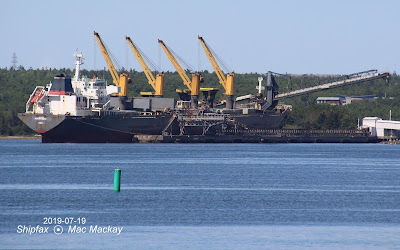 Algoma Verity alongside National Gypsum with the ship's 65.5 meter long self-unloading boom swung way out over land to give the traveling ship loader room to work.

Algoma does not stand on much ceremony when it takes over a ship, with funnel marks and hull paint to follow - sometimes years later.

The ship was built in 2000 by Shanghai Shipyard as a typical bulk  carrier with four cranes. However when the Asain economic crisis  ment a change of plans and a series of hoppers, and deck mounted conveyors and a long boom were added to permit the ship to unload to a stockpile. The cranes bucket the cargo out of the hold into the hoppers. It then runs along the conveyors to the boom which deposits the material on land.
Self-unloaders with conveyors in the bottom of the hold (gravity fed) are more expensive to build and sacrifice carrying capacity due to the sloping sides to the holds. They make up in speed of unloading to compensate.
This ship at 28,747 gt is able to reach 48,000 dwt, where a similar tunnel type self-unloader might only make 35,000 to 40,000 dwt. It is not a particularly fast unloader. It can only manage about 750 tonnes per hour, whereas the tunnel types can reach 3500 to 5000 tonnes per hour depending on the cargo.

Autocarriers were particularly present in the harbour today with Tombarra at pier 31 unloading Canadian military vehicles and other non-auto RoRo cargo.  At Autoport the first ship in was Olympian Highway in the flashy new K-Line livery. 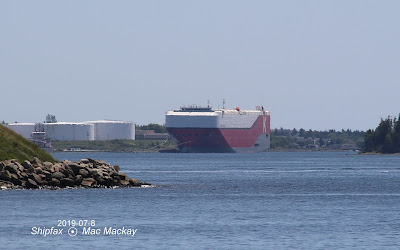 It was carrying import cargo, and sailed mid-afternoon for Baltimore. Its place was soon taken by Columbian Highway, which I did not see, but suspect was still carrying the old plain gray hull colour. It was not in port long either, and sailed for Emden, Germany, with some export cargo.

There was also activity at pier 42 as the second crib for the pier extension was coseyed into place.

The painfully slow tow from Pier 9C with Sandra Mary pulling full and with its towing line bar taught, and J.F.Whalen pushing took about three hours. 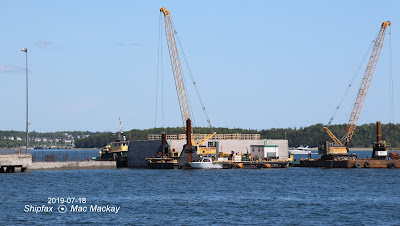 It was then nudged into place with the crane barge Idus Atwell holding it. The crane barge Derrick # 4 was then moved to the outer face to secure it for the night. 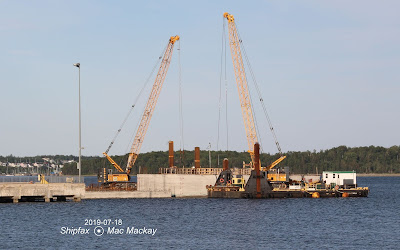 Once in final position the crib will be sunk in place, by admitting water through valves in the bottom.

The tender notice for structural fill was advertised in today's paper, with a closing date of August 1. It is the third phase of the project to extend Pier 42 to accommodate two large container ships at the same time.

Extending the pier is only part of the work needed to accommodate 10,000 TEU+ ships. Back-up land to store the boxes will have to double in size also, and that will necessitate filling in the spaces between the current finger piers if the South End Container Terminal is to remain the port's only facility for the large ships.

As I mentioned earlier in the week, traveling during the next month or so will mean sporadic postings here, and some of those will not be from Halifax.