Cunard's Queen Mary 2 and Queen Elizabeth arrived this morning, to tie up at adjacent piers 20 and 22. It is always an impressive sight when Queen Mary 2 arrives and sails, but there will be a special treat this evening when both ships leave port at the same time. 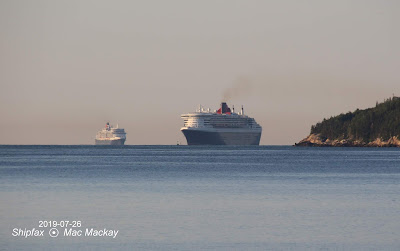 Starting at 6 pm when the ships begin to let go their lines, there will be a complex maneuver as the ships meet north  of George's Island and sail outbound in tandem. It takes some time to get away and move slowly, so the entire operation is expected to take 90 minutes (or more).

Cunard, now part of Carnival, still pays tribute to its founder Samuel Cunard, a Halifax businessman, with special events, awards and now this sail past.

On schedule, Queen Elizabeth got away first, moving south around George's Island, then northbound on the east side. 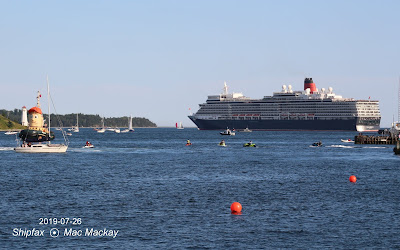 There were lots of spectator craft in attendance including the harbour mascot Theodore Too. 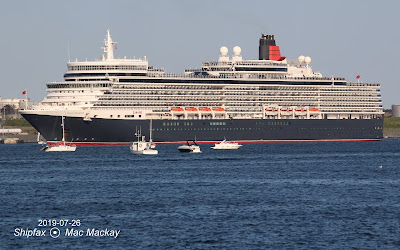 Meanwhile the tug Spitfire III was assisting Queen Mary 2 to get off pier 20 and head north of George's Island.

Once Queen Mary 2 was well underway, the tug scooted ahead and began a water display as Queen Elizabeth made its turn. 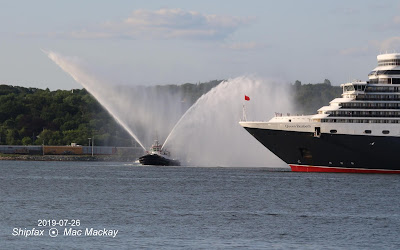 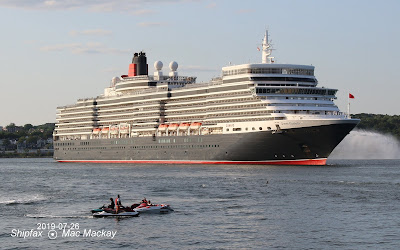 With its turn completed the two ships met at the ferry track and exchanged whistle salutes. 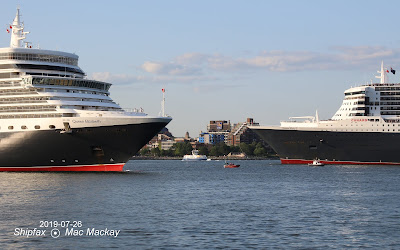 The tug fell in behind Queen Elizabeth and accompanied it outbound west of George's Islands, saluting at several locations en route.

Queen Mary 2 completed it turn and followed. Aside from a small Border Services patrol boat, it was unaccompanied. I thought this was a breach of etiquette. As senior ship, and flagship of the fleet, it deserved better. I guess the cost of two tugs was too much for Cruise Halifax. 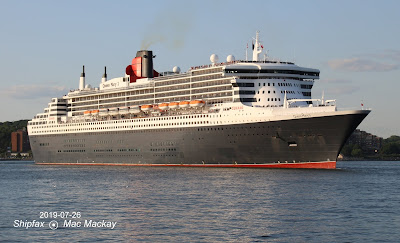 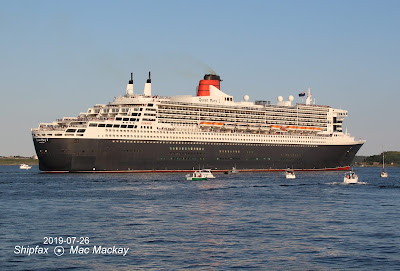 Although it is an imposing looking ship, Queen Elizabeth is the smaller of the two. Due to the higher freeboard of the transatlantic liner, Queen Mary 2 has fewer open and exposed decks, and this greater gross tonnage.