The first crib section for the southend container terminal extension was placed today. The unwieldy concrete box was built by McNally Construction at pier 9C and towed to pier 42 by their tug Sandra Mary, assisted by J.W. Whelan in an hours long operation. 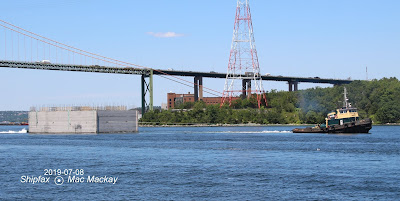 The tow got away from pier 9C at 1300 hrs, with Sandra Mary pulling hard and J.F.Whelan pushing. 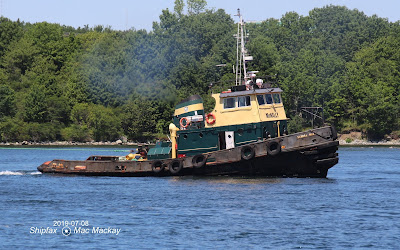 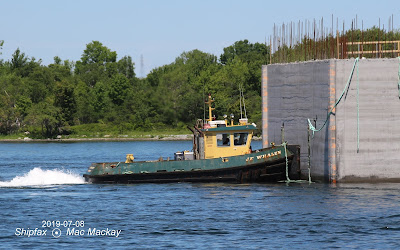 The base for the crib was built on a semi-submersible barge and when sufficiently advanced was floated off and moored alongside. There the additional 20 meters or so of concrete was poured in a continuous operation using slipforming. That process involves sliding the forms upward as the concrete is poured, resulting in homogeneous construction. Open cells in the crib allow it to remain afloat. 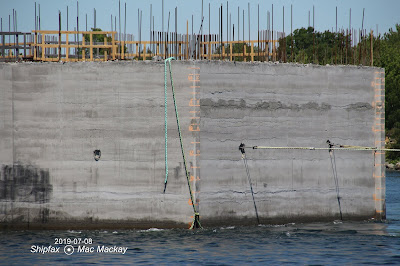 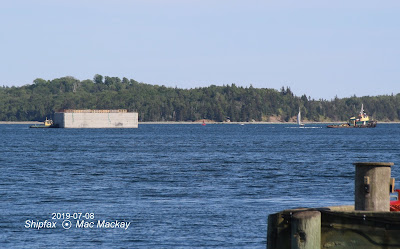 At 1700 hrs the tow had reached Ives Knoll, and it was still an hour or so before it was in place.

The harbour bottom where the pier is to be extended has been dredged and carefully graded in advance, and two barges, the dredge Derrick No.4 and the crane barge Idus Atwell were spudded down in position to guide the new crib precisely. Once all the cribs are in place and allowed to settle, final surfacing and cope walls will be built and the rest of the pier extension will be filled in. That work is expected to be complete early next year. 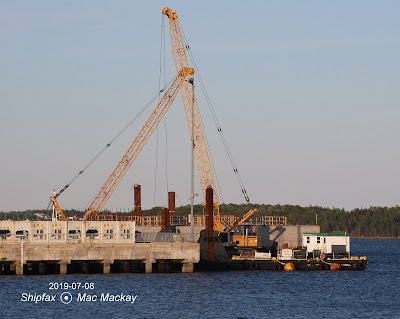 Firmly wedged between the tow scows, the crib is in position and now will be sunk in place.

Construction of the second crib is also complete and work has started on a third.