New and not new

There was one new ship to Halifax today, and several return callers.
New to Halifax ship is the X-Press Makalu making its first voyage for Melfi Lines. 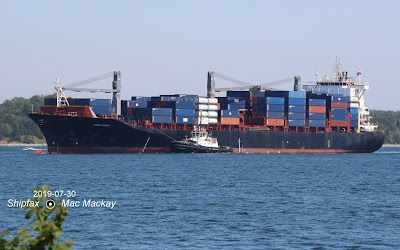 Built in 2008 by Stocznia Gdanska/Gdynia, it is a 2714 TEU ship with three 45 tonne capacity cranes. Built originally for the Peter Doehle company it was built as Arelia but immediately renamed Maruba Victory until 2010 when it became Arelia again. In 2013 it joined X-Press Feeders and took it present name. X-Press Feeders bills itself as the world's largest common carrier, with more than 110 ships of all sizes, and all chartered out to various shipping lines. The 32,161 gt, 38,629 dwt ship will load and sail tomorrow for Cuba.

Among the return callers is the tanker Elka Angelique, from Amsterdam for Irving Oil.

When it was here in 2013 it loaded some remainder cargo from the old Imperial Oil refinery.
http://shipfax.blogspot.com/2013/10/elka-angelique-arrives-to-load.html

At Autoport MSC Cristiana has been here many times. However since its first visit in 2016 it has received a new paint scheme.

Speaking of paint schemes, Wilhelmsen's Themis continues to fade. Built in 2016 by Hyundai Samho, the 75,283 gt, 23,783 dwt car carrier has a capacity of 8,000 cars. It is also one of the HERO class of environmentally advanced ships.

The normally bright Wilhelmsen red/orange colour is now only visible on some touched up areas near the waterline. This is surprising in a barely three year old ship.
Themis unloaded cars at Autoport yesterday and moved to pier 31 this morning to off load some other RoRo cargo.

Due to sail sometime tonight the French cable ship Ile d'Aix has been loading (or maybe unloading?) cable at 9B IT Telecom. 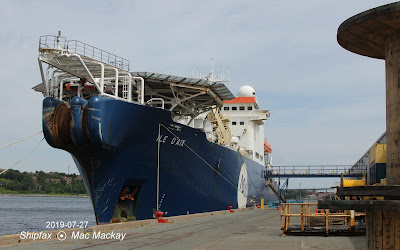 Cable is fed to or from IT Telecom's warehouse by means of a conveyor bridge, through a hatch in the ship's side.

Built in 1992 by Far-East Levingston (Keppel Fels) in Singapore, the 12,384 gt, 8,373 dwt ship has some of the classic cable ship lines with bow sheaves. Many new cable ships work only over the stern, but this ship maintains the traditional function. 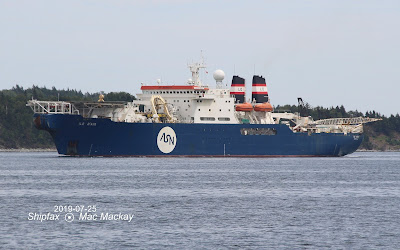 The ship made the headlines last year after a lube oil spill in Halifax Harbour.
http://shipfax.blogspot.com/2018/06/ile-daix-back.html

It's last assignment as far as I can tell was in the Irish Sea where it was doing early work for a new cable linking the US to Europe.