Most of the  foreign flag tankers calling at Irving Oil Woodside have been bringing refined product directly from Amsterdam. Sometimes however they go the Saint John, NB first then come here to unload the last of their cargo. Such appears to be the case today with the arrival of Advance II, which judging from its draft it has only a partial cargo left on board. 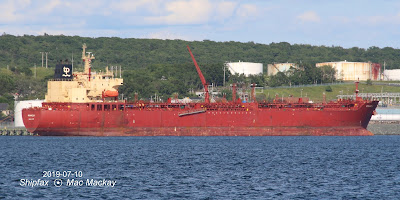 Operating for the 15 ship strong Transpetrol fleet, the ship was built in 2006 by STX Shipbuilding Co of Jinhae South Korea and has typical MidRange tonnages of 30,032 gt, 46,101 dwt. Although no departure time has been scheduled at time of writing, it will not be in port long. Irving's Acadian is anchored off Halifax awaiting its turn at the berth.

When it was here last on June 14, I gave very little information on the container ship Gerhard Schulte.
See: http://shipfax.blogspot.com/2019/06/quitting-time.html
I was also only able to get a "going away" photo. Today I was in time to get a view from a better angle.

The ship is obviously working for ACL as its deck is chock-a-block with ACL boxes.

Dating from 2006 when it was built by Shanghai Chengxi Shipyard, the 35,991 gt, 42,083 dwt ship has a carrying capacity of 3534 TEU including 500 reefers. Built as Gerhard Schulte it was almost immediately renamed APL Bangkok for a charter that extended until 2014 when it reverted to its former (and present) name.
The ship carries the Hong Kong flag for the anonymous owners Wealth Crown Ltd, but there is little doubt about the ships technical managers, Bernhard Schulte, the venerable German company that after 135 years in business now manages more than 160 container ships, 160 bulkers, 90 gas tankers and 190 chemical, product and oil tankers. The company also manages 40 offshore production and support vessels. from a
Commercial management is in the hands of Hanseatic Unity Chartering, a further example of the consolidation of German ship operators, which has 213 container ships in its stable from half a dozen German fleets.