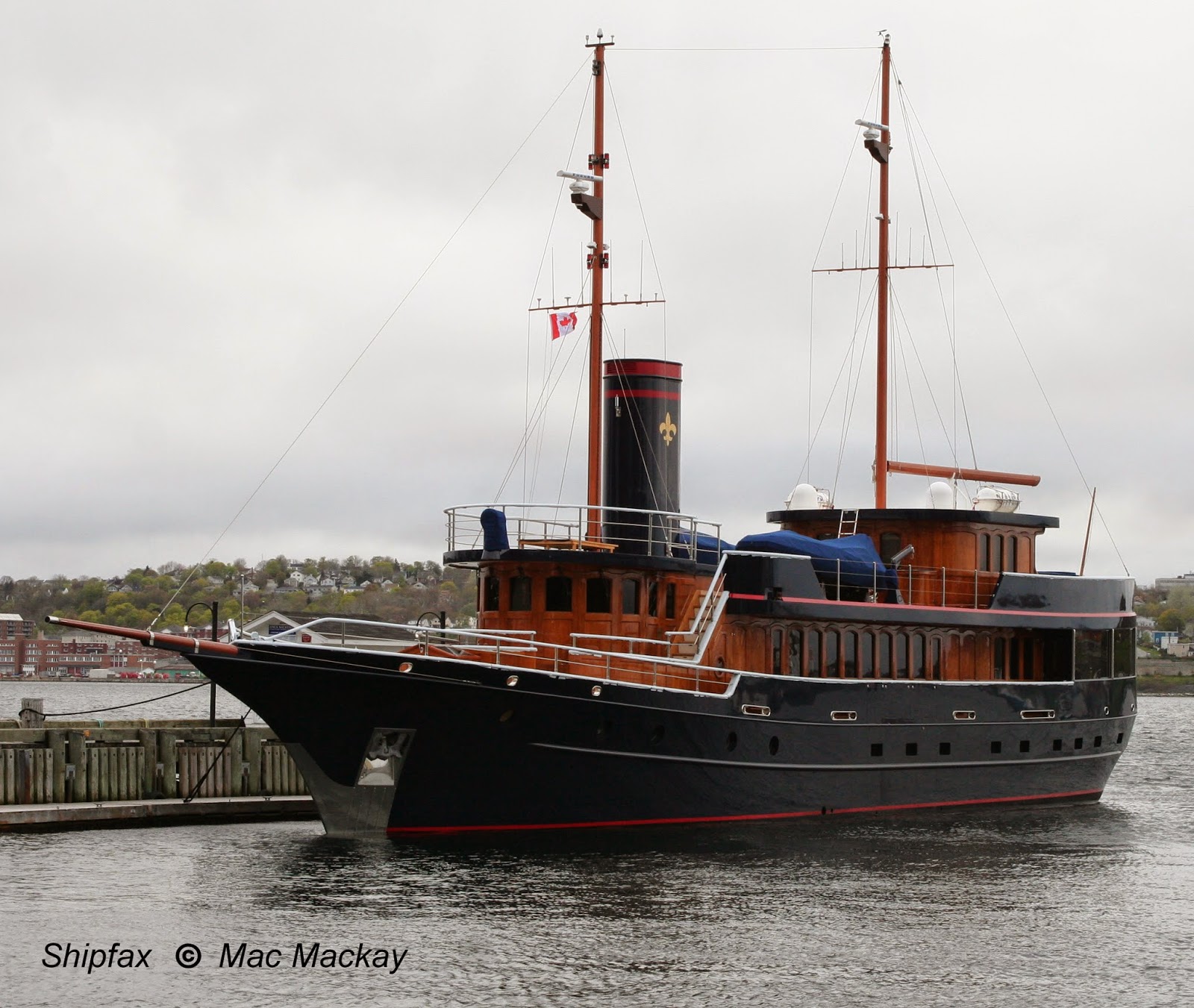 The yacht Bread is in Halifax on a delivery trip, back to the Great Lakes where it was built. The so-called classic re-creation  was named by its owner, reputedly a "major North American bakery owner". That a great deal of bread was required to build it is not in doubt, but casting ones bread upon the waters is a risky business, and I am not certain that the result has risen to the occasion. Perhaps bread and circuses would be too strong a description of this craft. 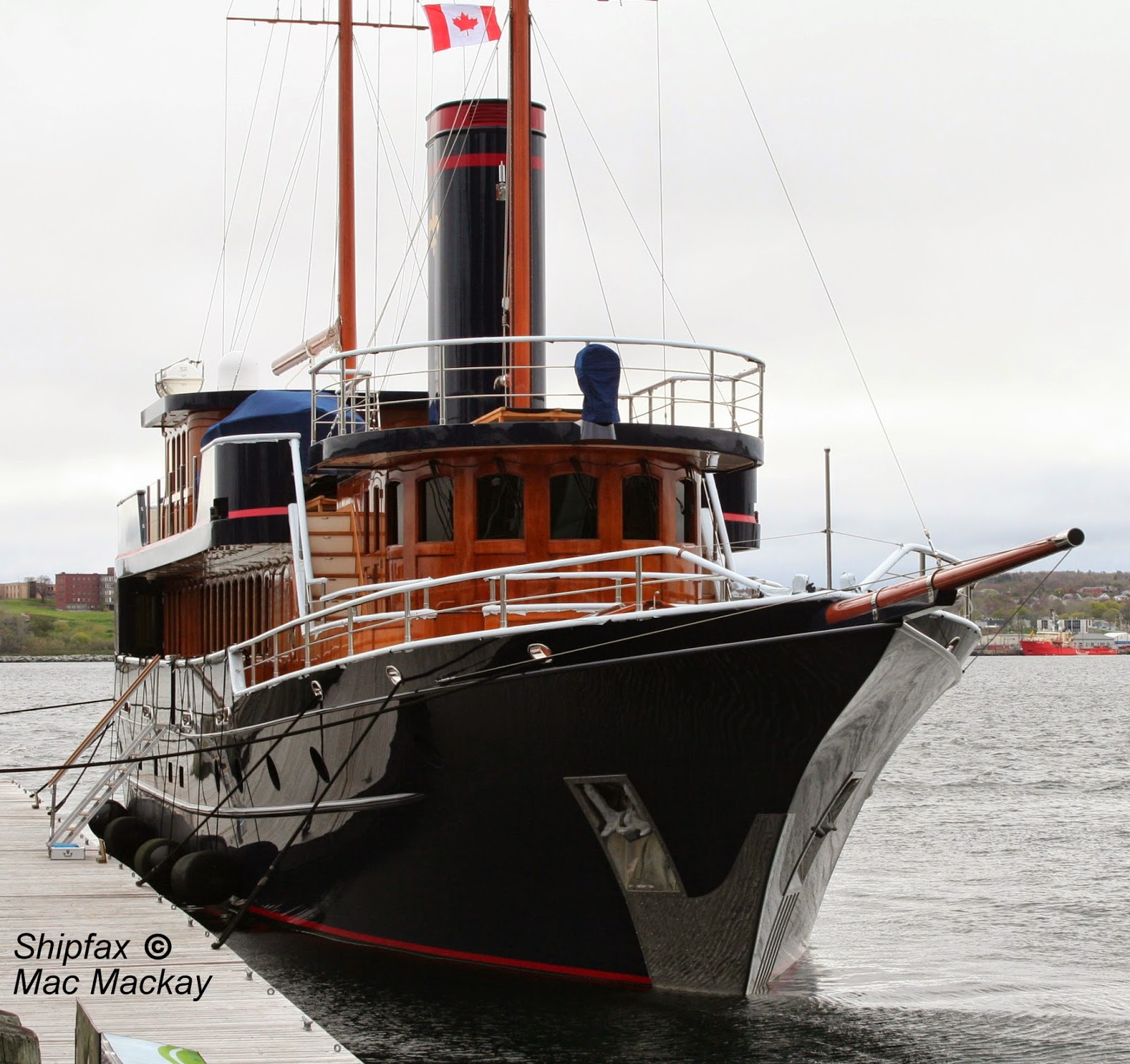 As usual Shipfax has found the back story behind the story. 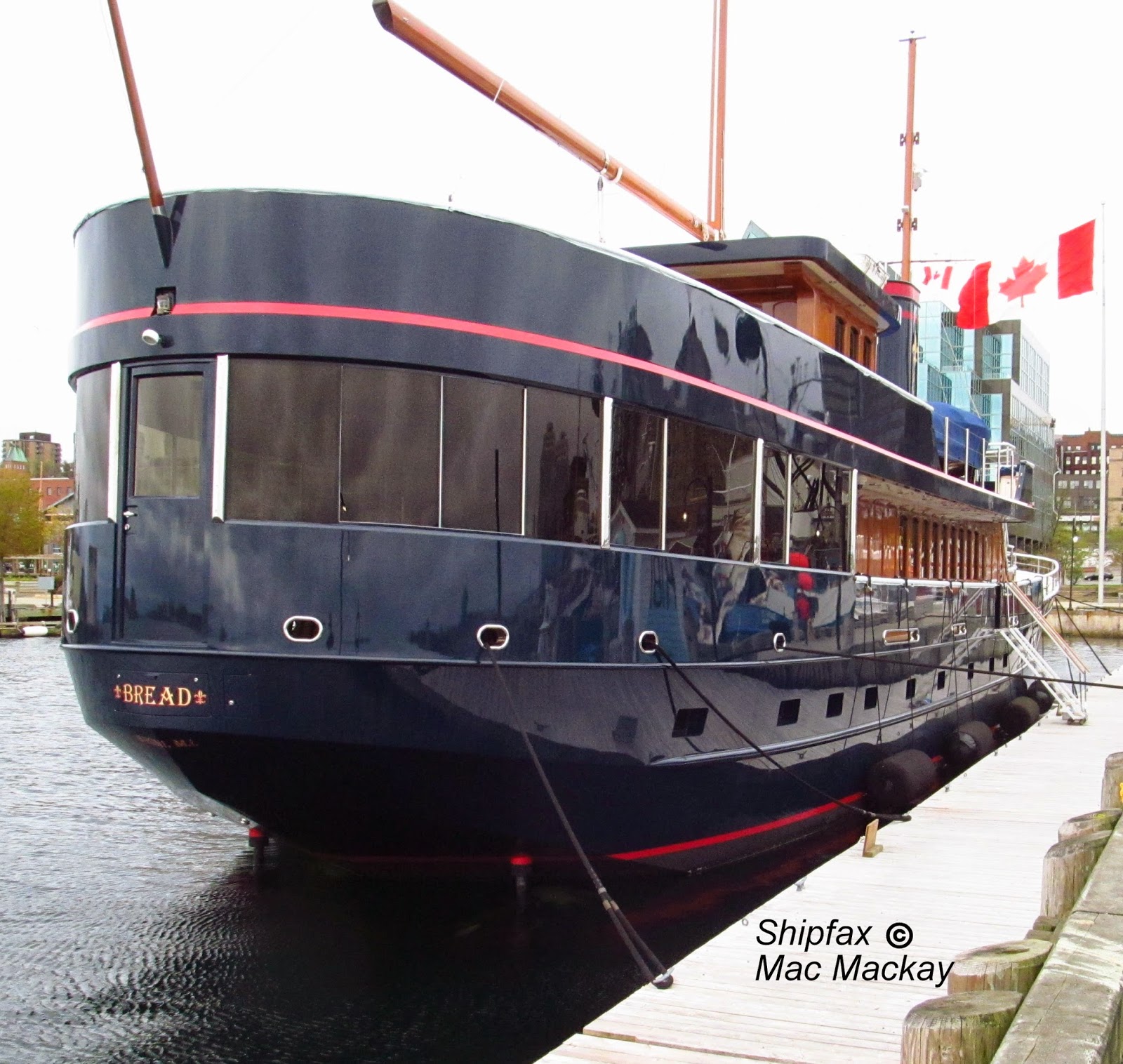 Bread started life in an unusual place - St.Thomas, ON, well inland from Lake Erie, where it was eventually launched. Builders Kanter Yachts (now Kantermarine)  had moved inland due to lack of space in Port Stanley, ON, and so in August 2007 when they were ready to launch the boat, then named Aurora, they had to truck it to Port Stanley, which was a bit of a logistical nightmare. Numerous utility lines had to be raised or disconnected to make the ten mile trip. Once it made its acquaintance with the water, Aurora was fitted out with masts, bowsprit and steamship-like funnel.

Originally ordered by interests associated with The Cliff Restaurant in Barbados, the boat was to be a floating reception venue to host up to 40 people for weddings and honeymoons. After a hair raising late season trip down through the Seaway it arrived in Halifax in December 7, 2007, and it eventually reached its destination.

There are a number of photos on line of Aurora as it was delivered:
http://www.yachtcharterfleet.com/luxury-charter-yacht-25868/bread.htm

The original plan did not turn out as expected, and the $3mn boat was put up for sale. It was then acquired by the wealthy baker, who under took to have it totally rebuilt by Rolly Marine in Fort Lauderdale and Rybovich Shipyard in Palm Beach, Florida. In 2012, it was completely overhauled and even re-engined with new 575 bhp Caterpillars. They built all new hi-lux accommodations for eight guests in four suites and eight crew. A new cabin was built on the upper after deck and to keep exhaust fumes away, the funnel was extended. The foremast was re-stepped to the wheelhouse, the rails were extended, round hull deadlights were replaced by oblongs, and the list goes on endlessly. And just to add to the luxury touch, all the exposed cabin work above main deck level was clad in beautifully fitted wood, with a high gloss finish.

To see details of that work go to:
http://www.northropandjohnson.com/yachts-for-sale/607-BREAD

The woodwork is gorgeous, the hull coating is perfection, the stainless steel fittings are spotless, but the overall effect is ............well I don't have a word for it.

Current value I have seen estimated at $13 million.