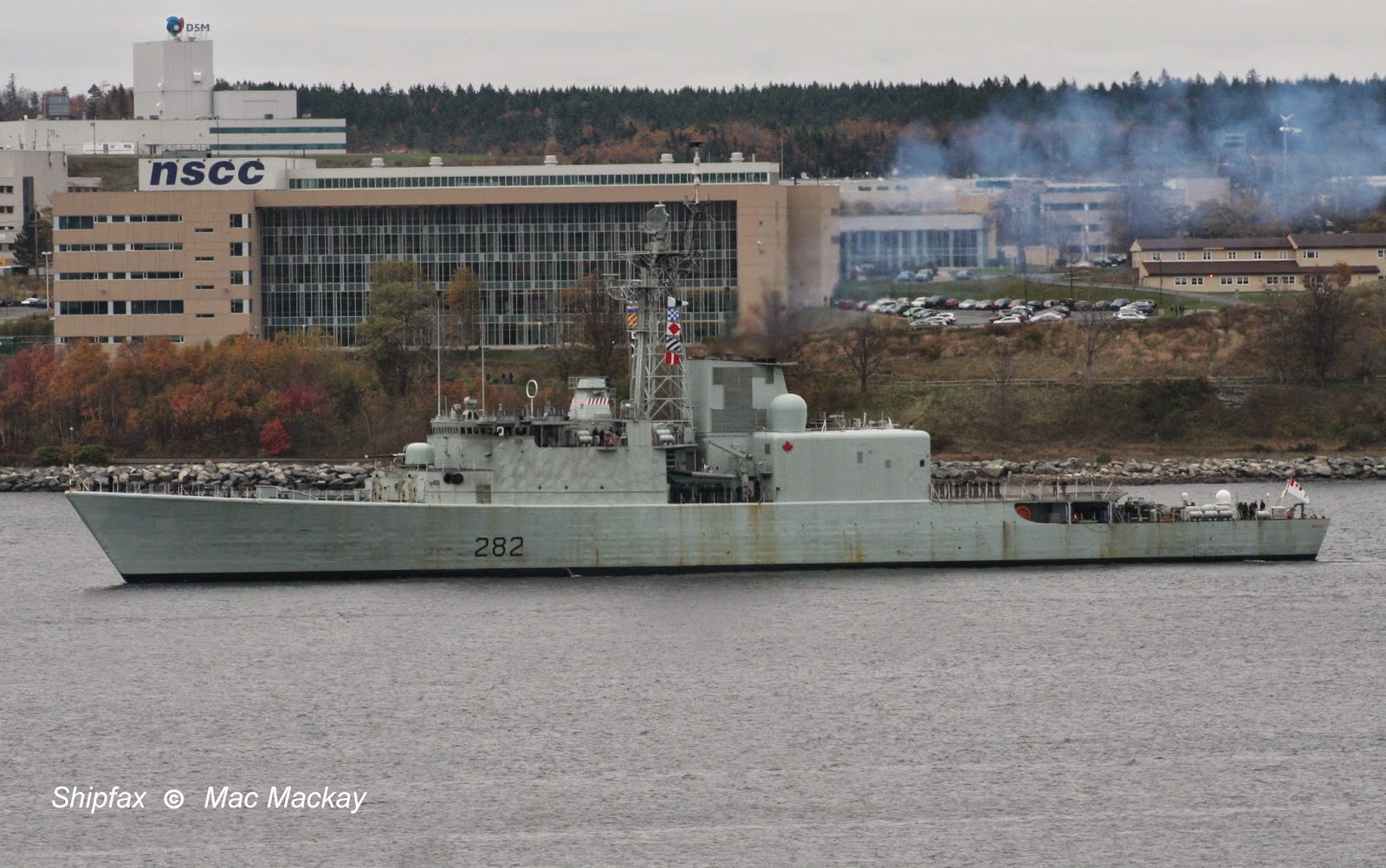 HMCS Athabaskan returned to Halifax this morning after a 53 day mission in the Caribbean called Operation Caribbe (sic) during which it spent 53 days at sea, participated in six intercepts and recovered many tons of cocaine.
Canada's only operational command and control vessel, has returned to port just in time to see sister Iroquois paying off, likely before before Remembrance Day.
The ship's history is too well known to dwell on, but suffice it to say, it was laid down in 1969, launched in 1970 and commissioned in 1972. It completed a TRUMP refit in 1994 (roughly mid-life) and a refit in 2012. On return from the latter it was damaged in a collision with its towing tug. Workups following that refit started in April 2014.
Sister Tribal Huron was sunk as a dive site and Algonquin will not be repaired after it was rammed by another ship. With only one true destroyer in the fleet the RCN will be severely compromised for many years to come. Athabaskan is not likely to last much more that a year to eighteen months under the present plan.

Back in 1984
HMCS Athabaskan was in its prime with its very racy twin canted funnels from its gas turbine propulsion system.:

Athabaskan is cold moved from November Alpha November (Bedford Magazine) back to HMC Dockyard by Glen tugs (see today's Tugfax for more on the Glen class.) 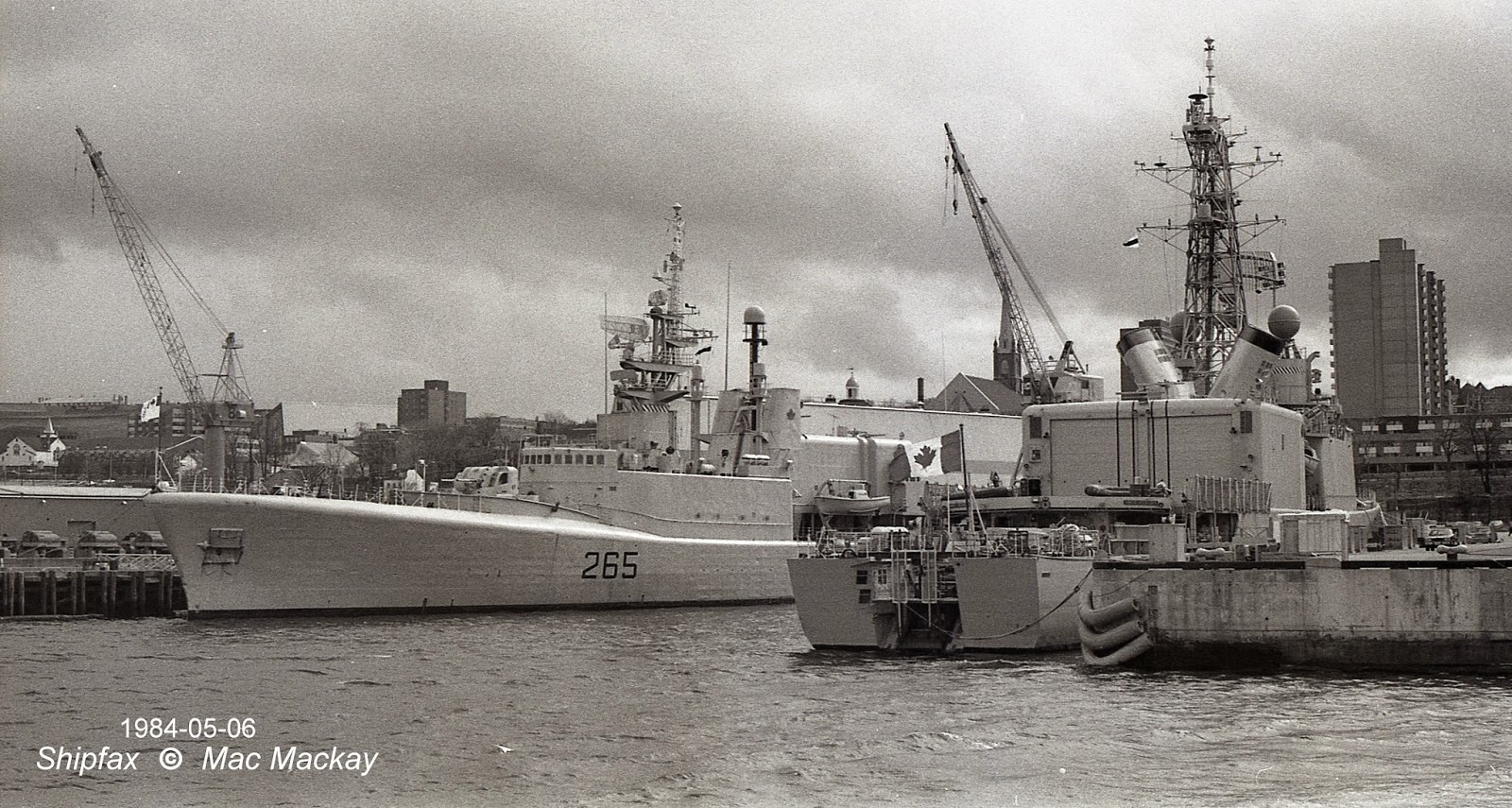 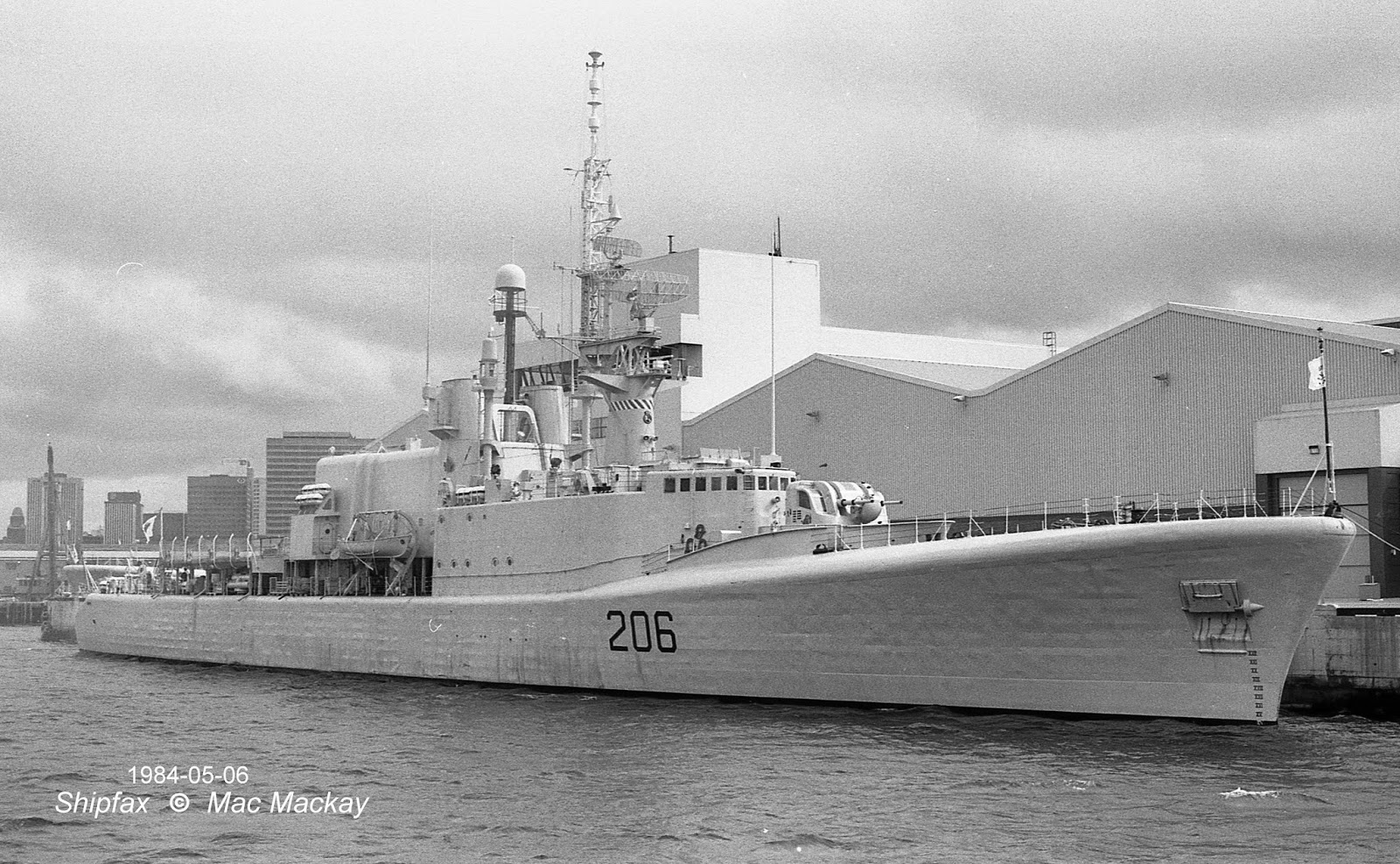 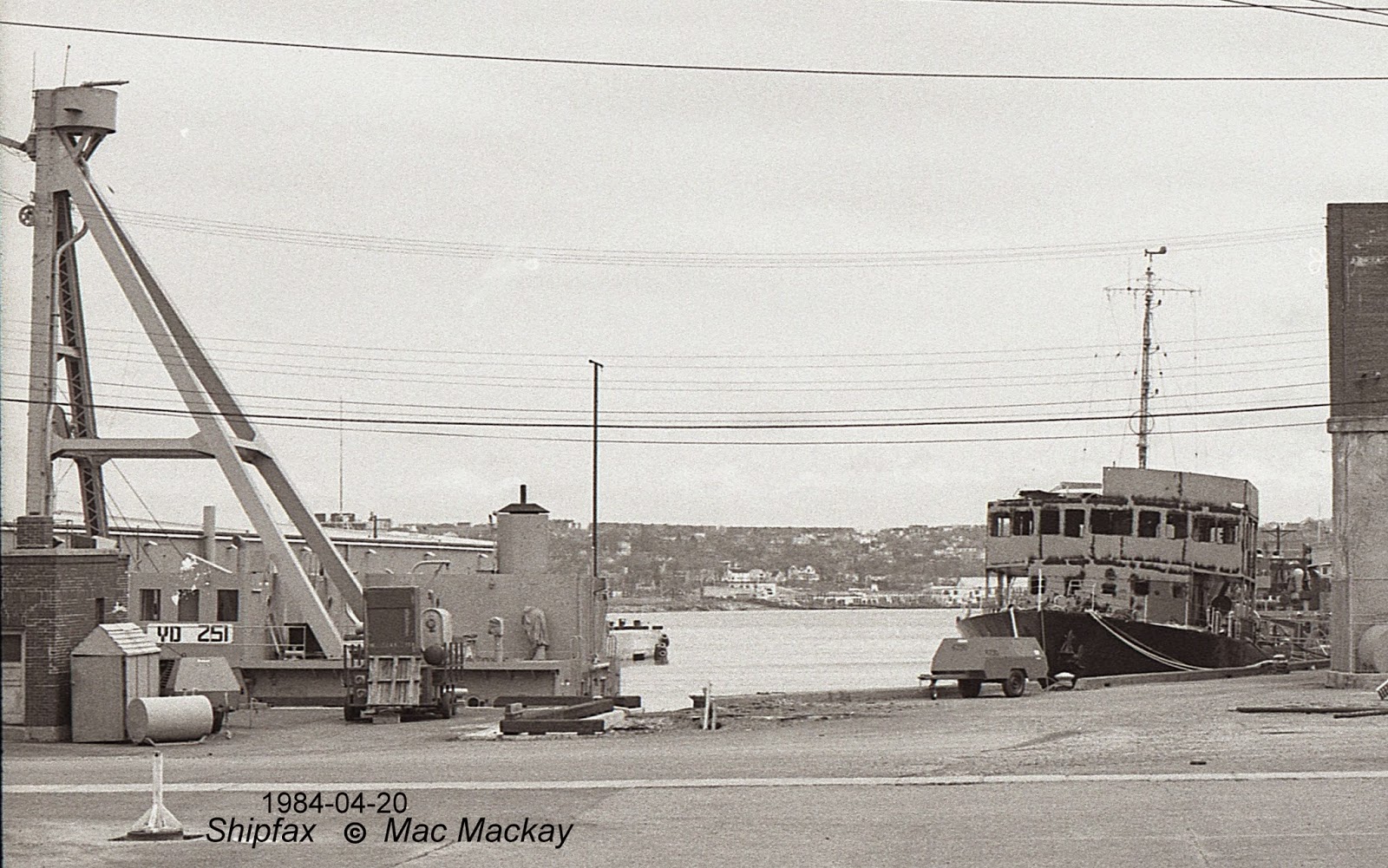 Steam crane YD 251 is connected to shoreside steam, but HMCS Sackville has been allowed to go cold. Its post war superstructure is being removed as it is restored to its war time appearance. 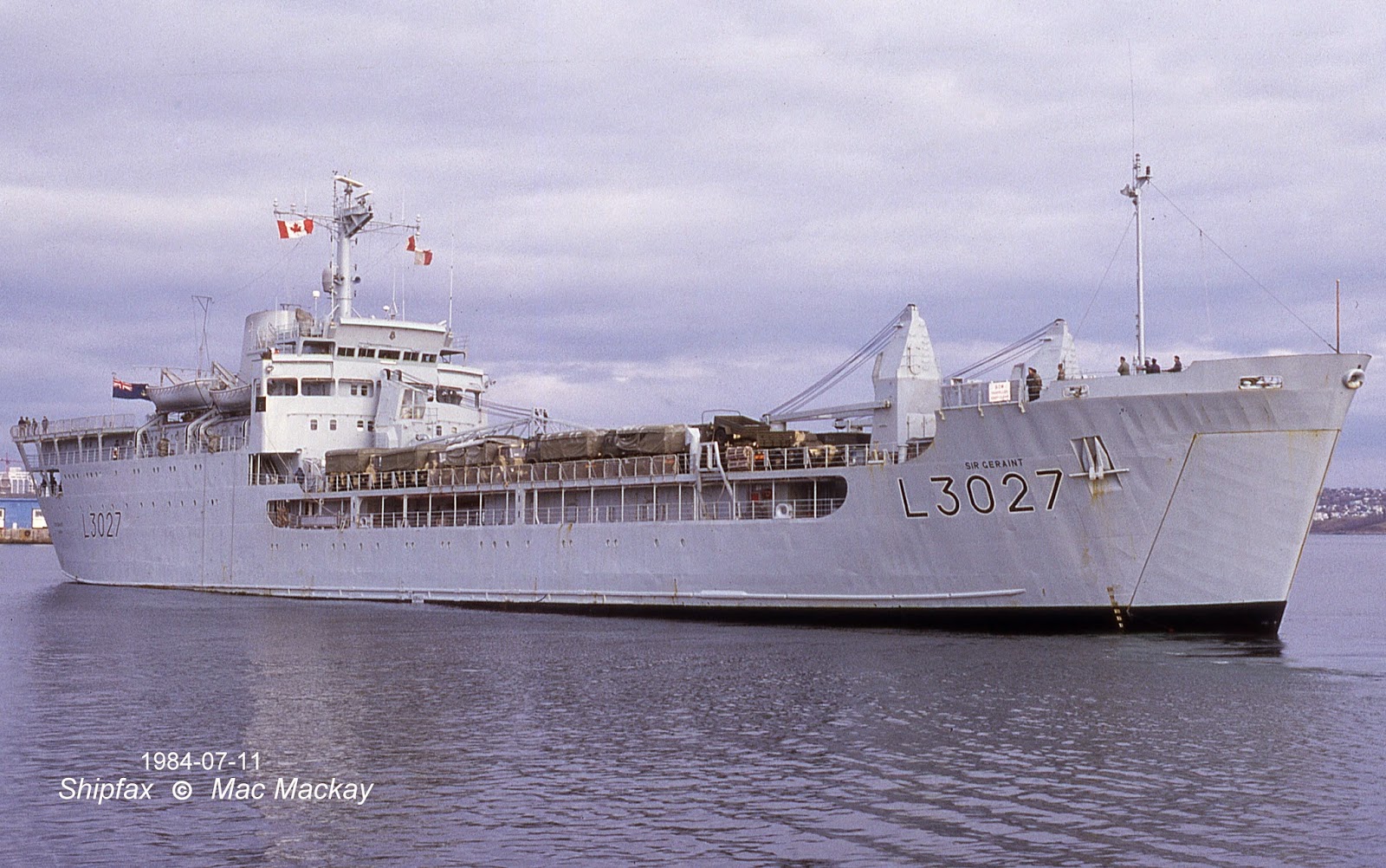 Built by no less than the Alexander Stephen shipyard it was commissioned on the glorious 12th of July 1967. It was just about to enter refit when Argentina invaded the Falkland Islands April 2, 1982. The ship was very quickly returned to service, stored, bunkered and loaded with commandos, helicopters and other gear and sailed April 6. It arrived off Ascension Island April 14 transferring cargo to other combatants. From then until July it transferred bunkers from commercial tankers into the war zone, landing on several beaches to fuel and restore ground forces. It returned, unscathed, via the Ascension Island to the Marchwood, UK arriving July 23. Of the six sister LSLs in the war  Sir Galahad was lost  and three others were damaged.
The ship was finally decommissioned in 2003 and sold for scrap in 2005.