Thanks to Halifax Shipping News for alerting us to the names selected for Atlantic Container Lines' new G4 ConRo ships. The names Atlantic Star, Atlantic Sail, Atlantic Sea, Atlantic Sky and Atlantic Sun will become familiar to Halifax as the new ships come into service next year. However one of the names is already familiar, at least to us old timers. 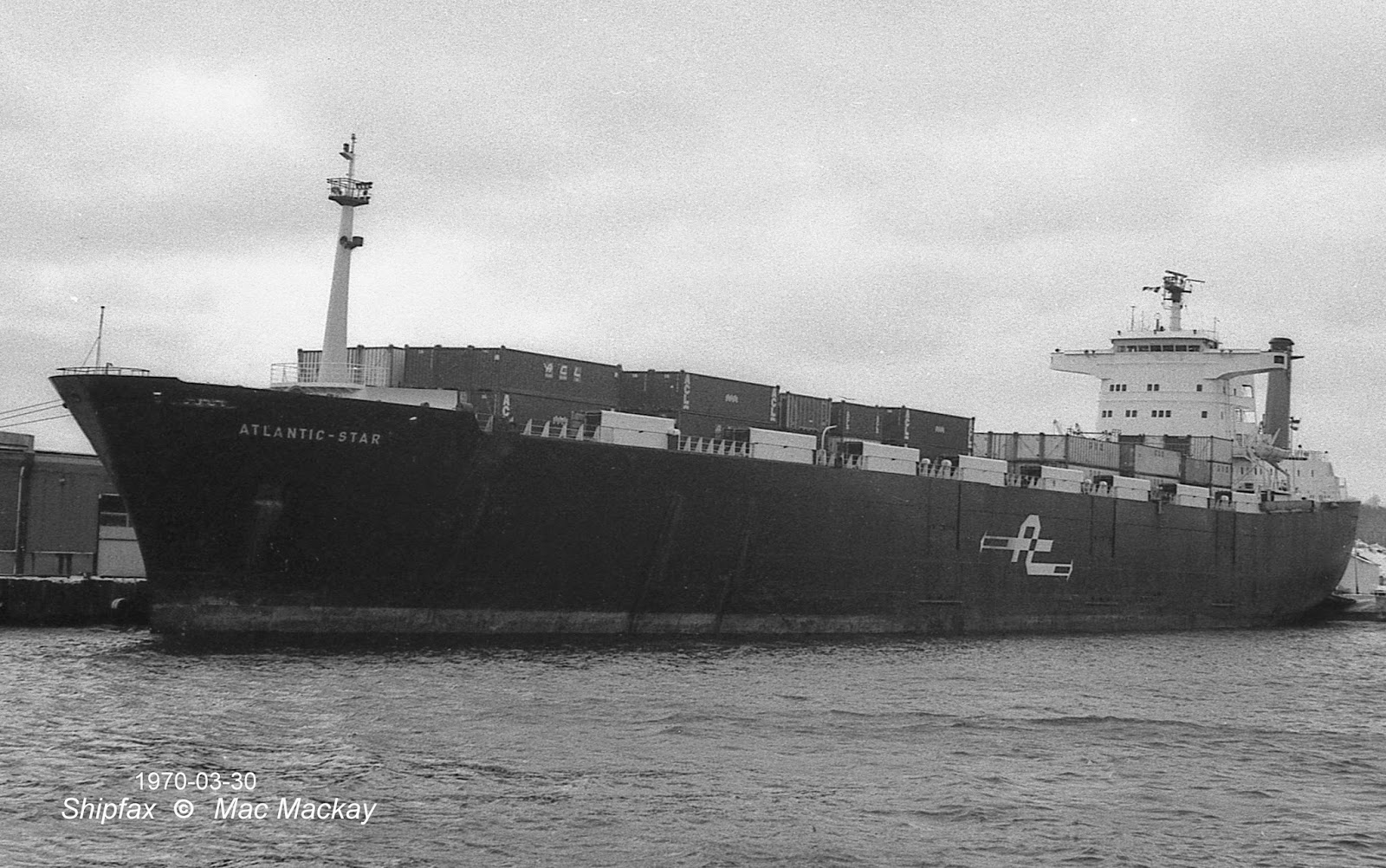 The first ocean RoRo cargo ever delivered to Halifax was carried aboard the first Atlantic Star, a G1 (1st generation) ACL Con Ro ship. That cargo arrived March 3, 1970 and consisted of 200 crated Volvo car chassis for assembly in Halifax, and 200 finished Volvos for onward distribution to US markets. It landed at the newly built RoRo ramp at pier 36 (still in use today but now within Halterm). Halterm construction was still underway, and no container cranes existed in Halifax. It does not appear that the ship unloaded any containers on that trip. 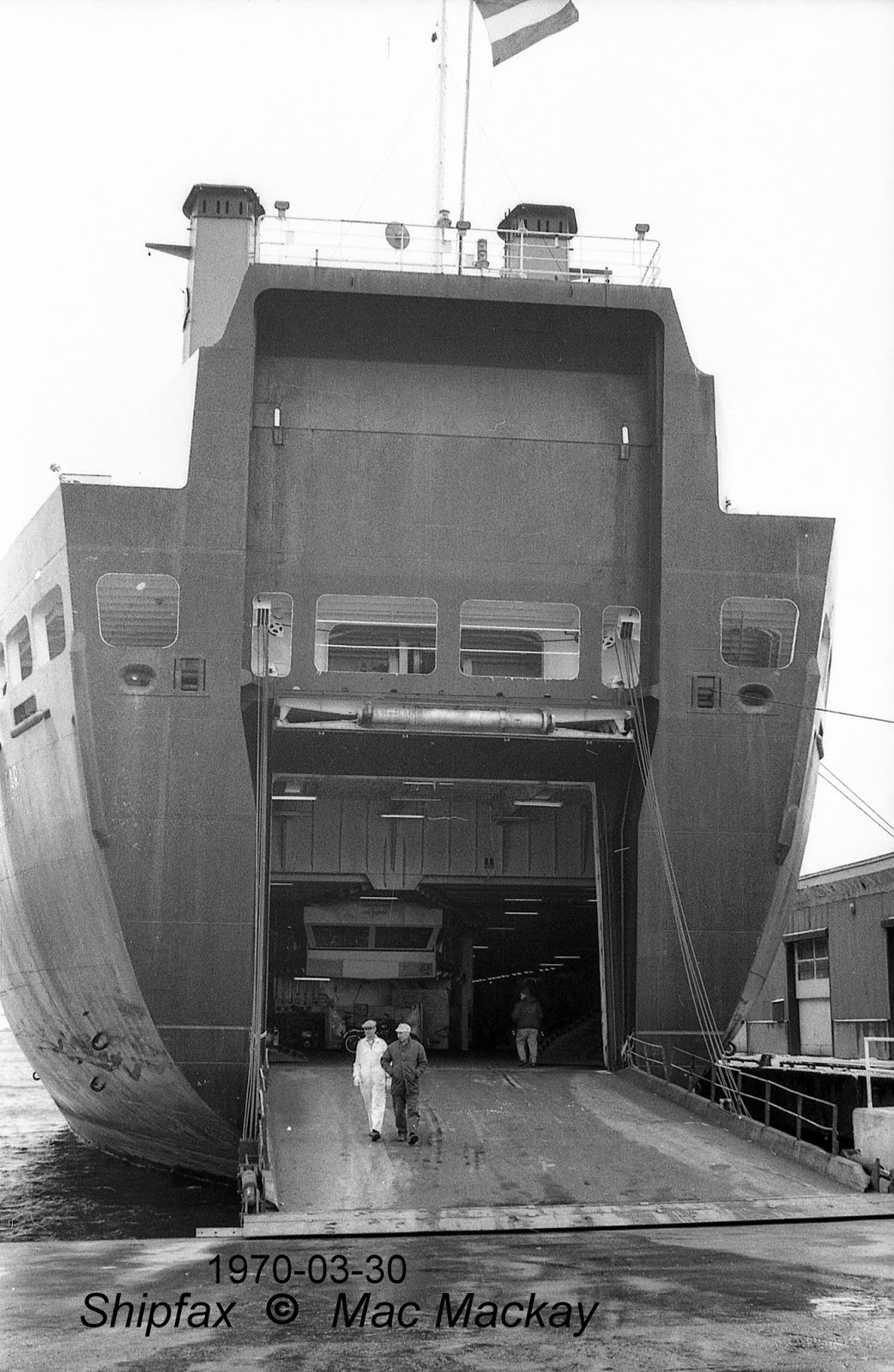 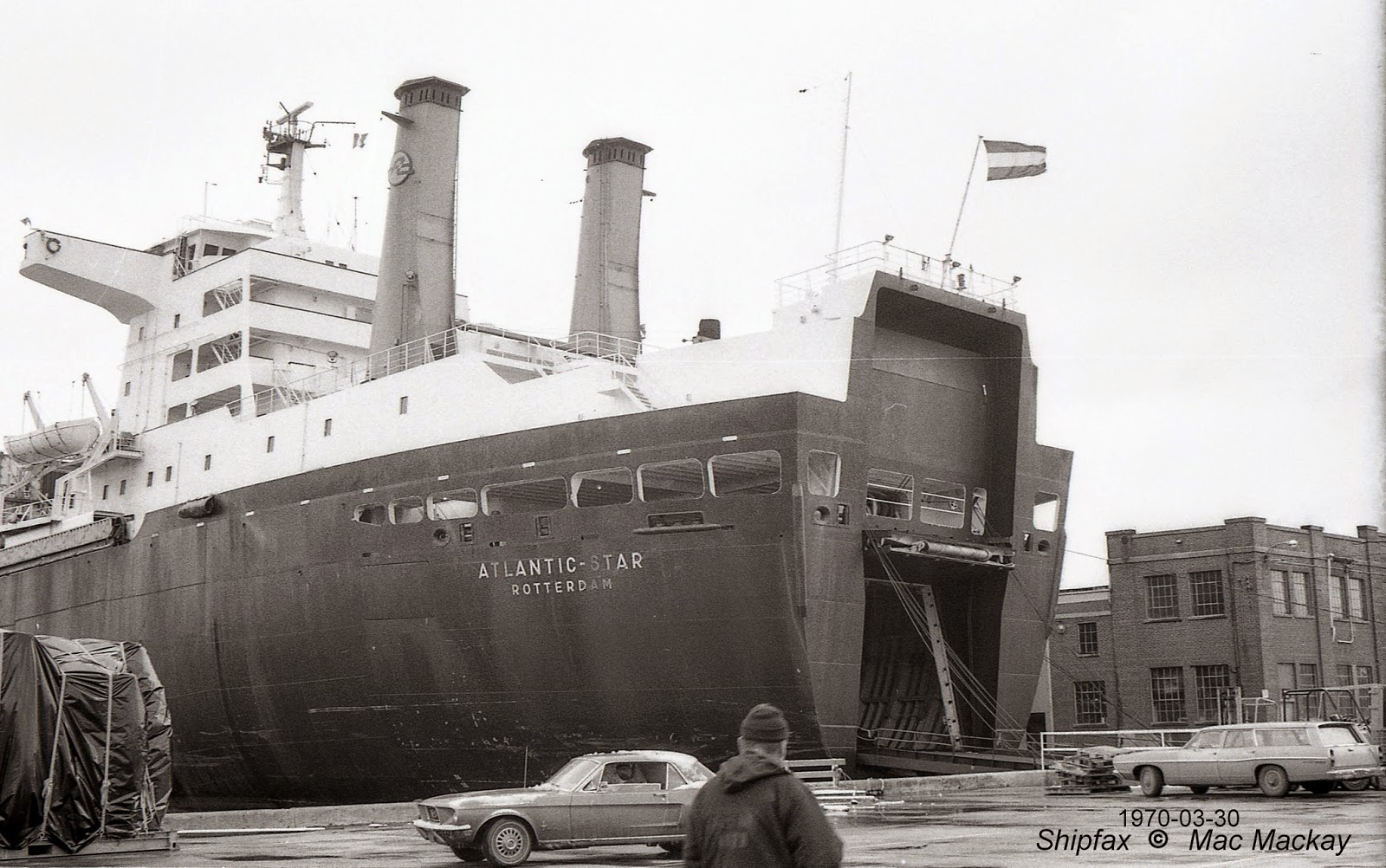 Ramp down at pier 36 - note the old freight shed - long since gone. The tarped pallet on the left is part of the RoRo cargo. The ship carries the original ACL logo and buff funnel.

Atlantic Star was built in 1967 by Atelier et chantier de Dunkerque et Bordeaux (France-Gironde) at Dunkirk, France for Holland-America Line, a founding partner in ACL. In 1976 the ship was sent to Japan and lengthened 25.8 meters by Hitachi Zosen, Innoshima. They also added hull sponsons for strength and stability.  Gross tonnage increased from 11,839 to 15,000 (sources differ) and deadweight from 18,500 to 20,400 (references differ due to changes in tonnage calculations methods, conversion to metric, etc.,). Its container capacity increased by 400 TEU to 1154. The ship had four cellular holds forward and carried 367/20 ft, 94/40 ft containers below deck and 191/20 ft, 204/40 ft on deck.
Ship's propulsion was by means of a single 9 cylinder MAN engine generating 20,700 bhp through a single controllable pitch prop. As built its speed was listed as 21 knots, but this was reduced to 20 knots after lengthening. The twin funnels allowed for a clear RoRo deck access amidships. 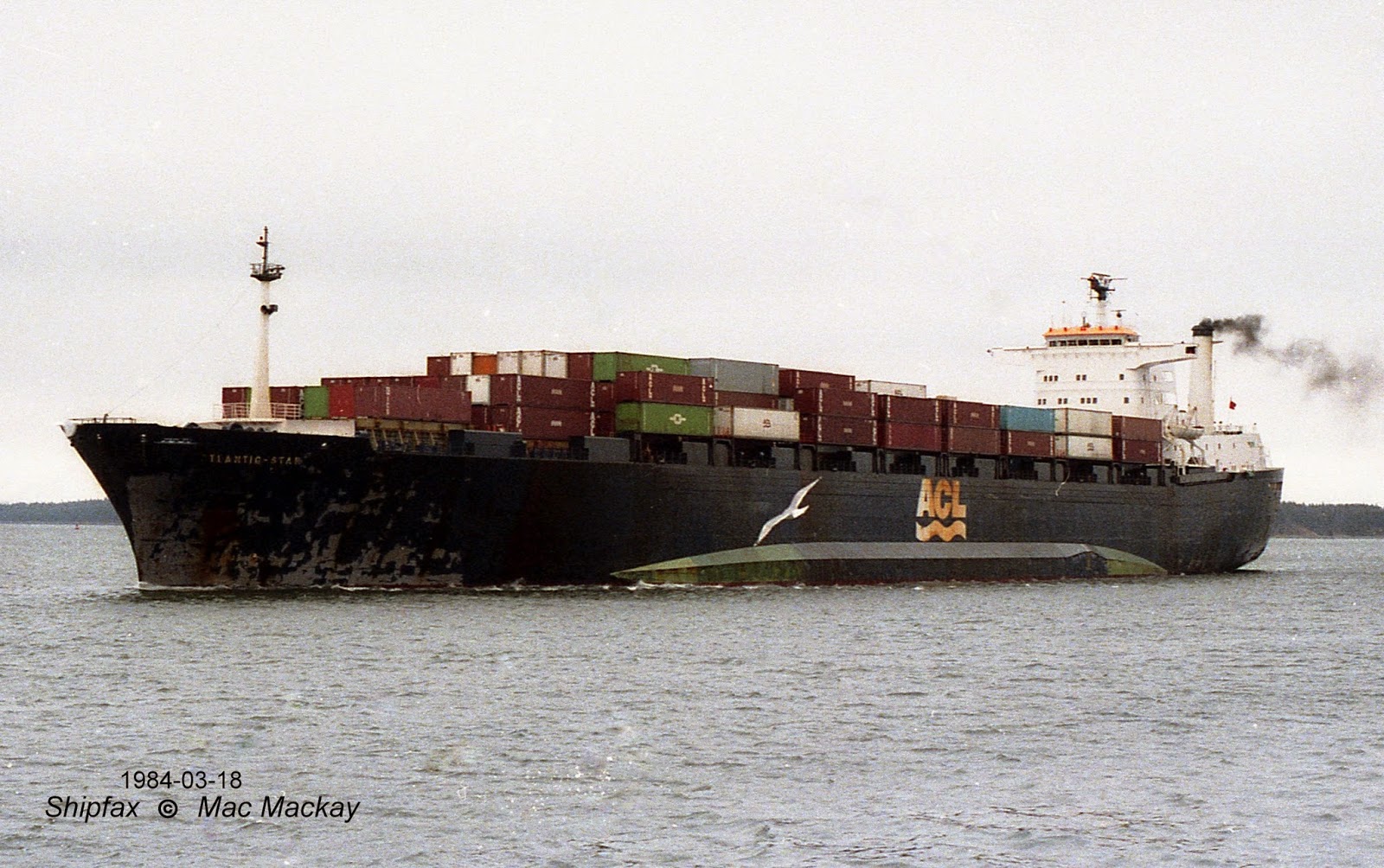 After lengthening - the hull sponsons were necessary, but unpopular with pilots, who had to board the ship just above a specially built notch. 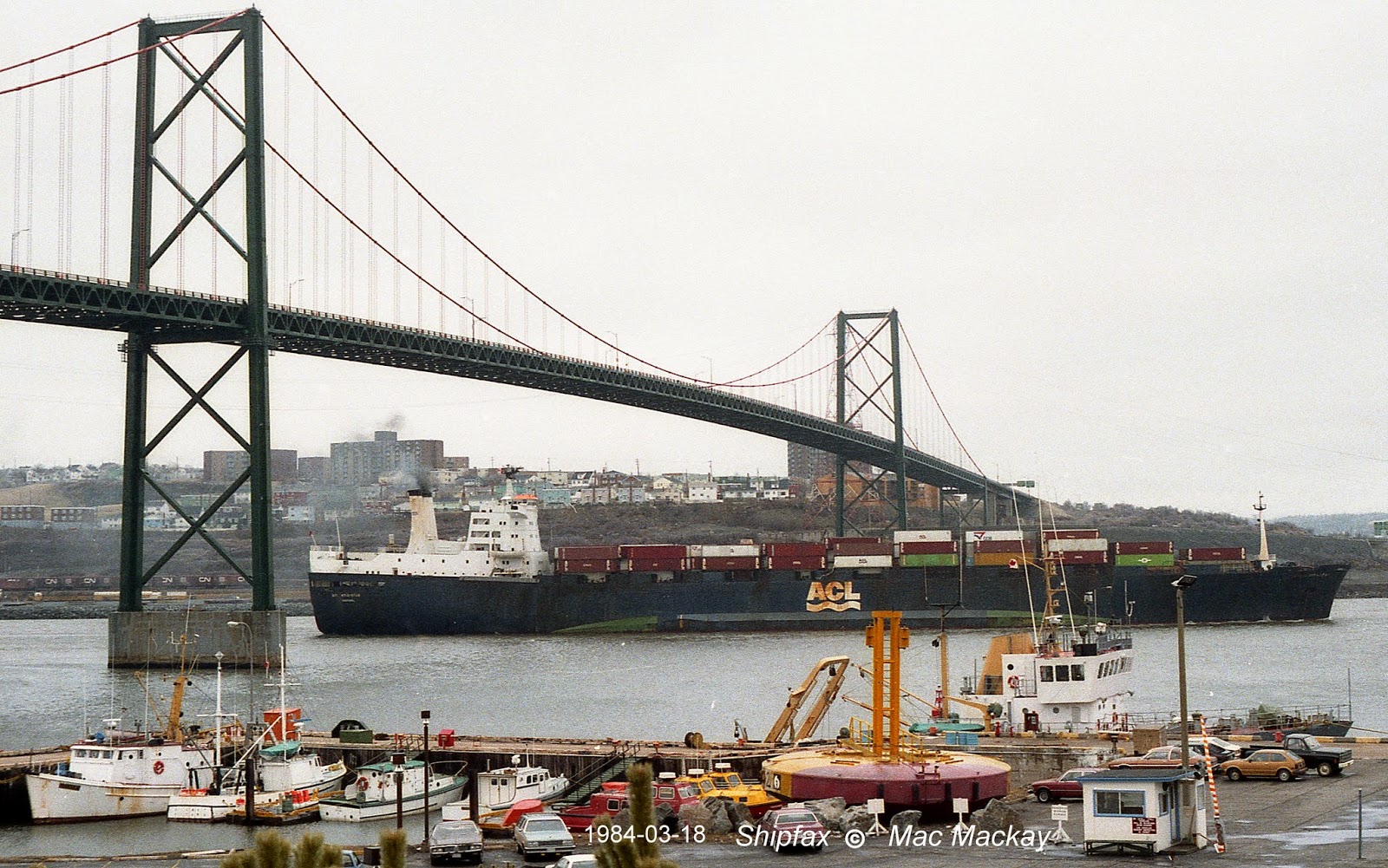 Passing under the MacKay bridge in 1984, the long gone Navicula and E.E.Prince are among the boats tied up at BIO, along with a weather buoy on the dock.

ACLS's original partners, Holland-America, A/B Transatlantic, Swedish-America Line and Wallenius Lines were joined in 1967 by Cie Générale Transatlantique and Cunard Steamships. As ACL ownership evolved, Atlantic Star was transferred to Cunard in 1983, and they were the owners when it was sent to Kaohsiung for scrapping December 14, 1987. It went out flying the British flag, and registered in Liverpool.

Sailing from Halifax for the last time October 11, 1987, the ship still looked impressive, despite the sponsons.

Note the dimple in the sponson where the pilot had to board. 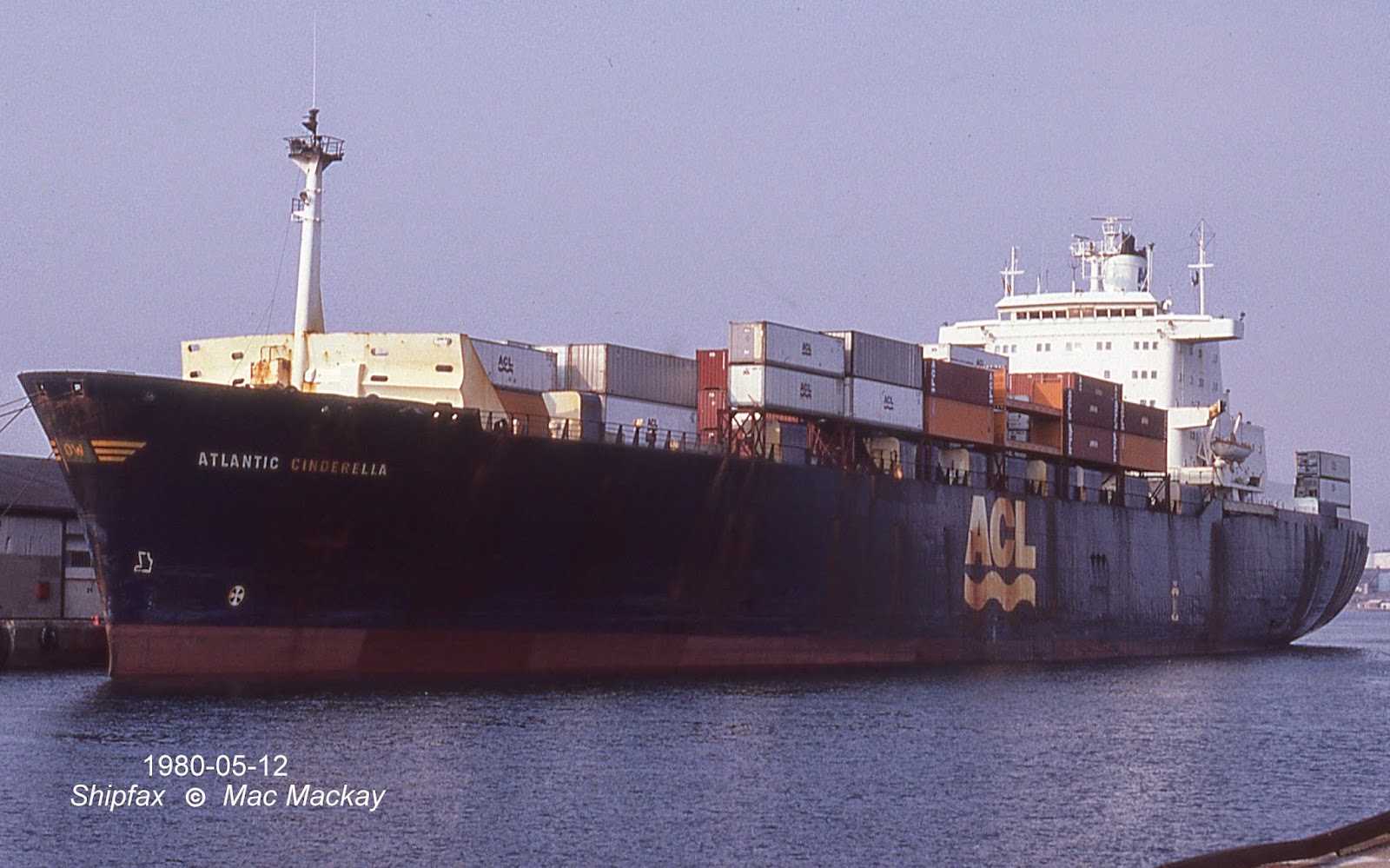 The mighty G2s raced across the Atlantic at 24 knots, carrying RoRo cargo and a modest 738 TEU and at great cost. Powered by four STAL-Laval steam turbines giving 35,000 shp to two screws, they were "gas guzzlers" extraordinaire, which meant a relatively short service life. Atlantic Cinderella (the Wallenius motto on the bow, explains the name choice - Wallenius uses operatic figures for all its ship's names) at pier 33-34, for repairs May 12, 1980. It did not sail until May 15.

Atlantic Cinderella was built at Dunkirrk, in 1970 and measured 15,347 gt. It was laid up in Jacksonville, FL in December 1984 and left in tow in October 1985 for Kaohsiung. It arrived at the scrappers January 19, 1986, ending a very short life span for a ConRo ship.
It was stated that at the time when they were no diesel engines powerful enough to drive these ships at 24 knots, and steam was the only alternative.


When the G1s and G2s were scrapped ACL's services on its own ships were consolidated on the G3s and an arrangement was made with HAPAG-Loyd to also carry ACL boxes. After several iterations, Grimaldi Group became ACL's sole owners in 2007.

On April 7, 1984, Atlantic Companion was making its first eastbound transatlantic crossing when it had a supercharger breakdown shortly after leaving Halifax and was towed back in by Point Vibert and Point Vigour It was tied up at pier 33-34 for repairs. The ship was launched December 3, 1983 and made its maiden voyage to Halifax, arriving March 27, 1984. Celebrating thirty years of service this year, these ships have proven to be more durable and more reliable than the G2s and even the G1s.

The red reflection in the photo above is from Cavallo (a.k.a. Cabot in later life) - making its departure from - you guessed it- pier 36. Here's what she looked like in 1984:

Cavallo entering Eastern Passage en route to Autoport, May 28, 1984. It began its weekly sailings to Newfoundland in 1982. Renamed Cabot in 1988 it continued to operate on the St.Lawrence, but sometimes from Halifax, until earlier this year when it finally went to scrap in Turkey. Much more on this ship in earlier Shipfax posts.  (ASL stood for Atlantic SeaRoute, which through mergers, became present day Oceanex).

Addendum - to keep track of the G4s go to: http://www.nextgenerationconro.com/