At this time of year, many ships arrive at dawn or before and sail at dusk or after. I call the 8 to 10 weeks of the year when this happens the dark ages, because photogrpahy is a challenge. However some ships just squeeze it close enough that I can get a photo.

This morning, with three cruise ships arriving in misty/rainy weather, it was not going to be a pleasant day for passengers or harbour watchers. 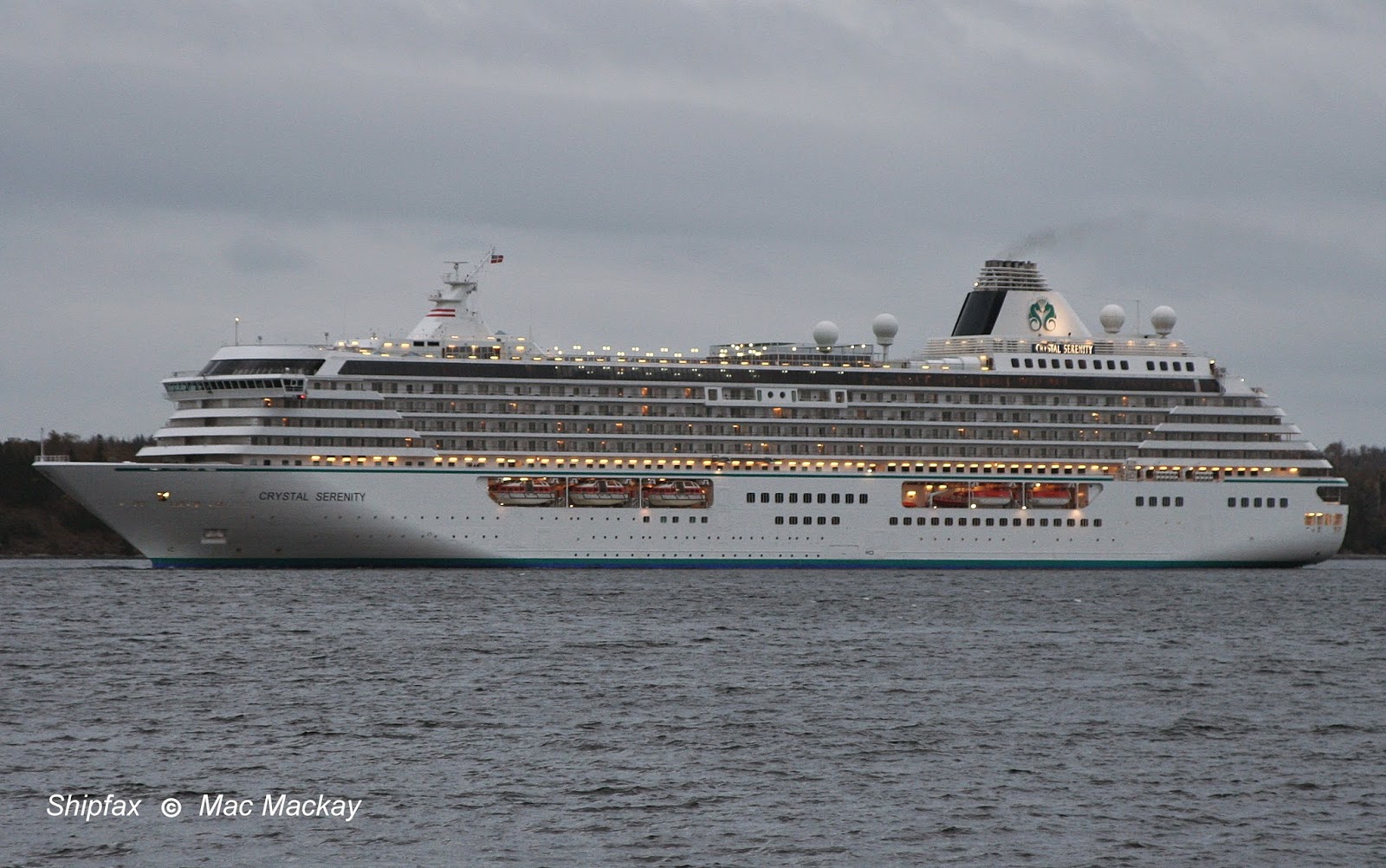 A brightly illuminated Crystal Serenity picked up its pilot at 0715, and it was well after sunrise when it reached the inner harbour at 0755 - but the sunrise wasn't visible! 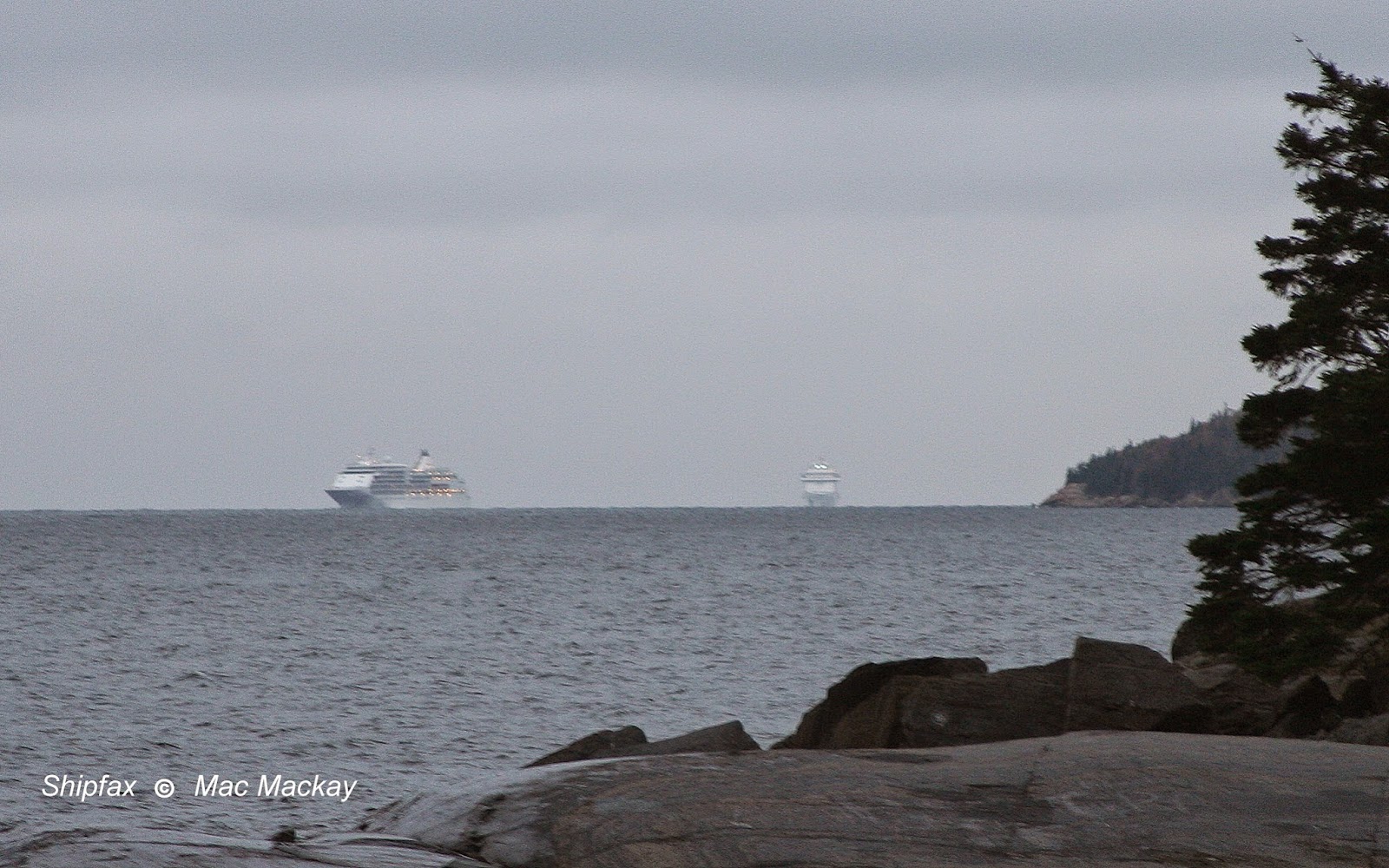 Silver Whisper and Royal Princess were due for their pilots at 0730 and 0800 and were both some distance off by 0800 when I had to be elsewhere. Both these ships are remaining in port for the night, having jiggled their schedules due to weather.

At the other end of the day, two Zim container ships passed each other at Middle Ground. 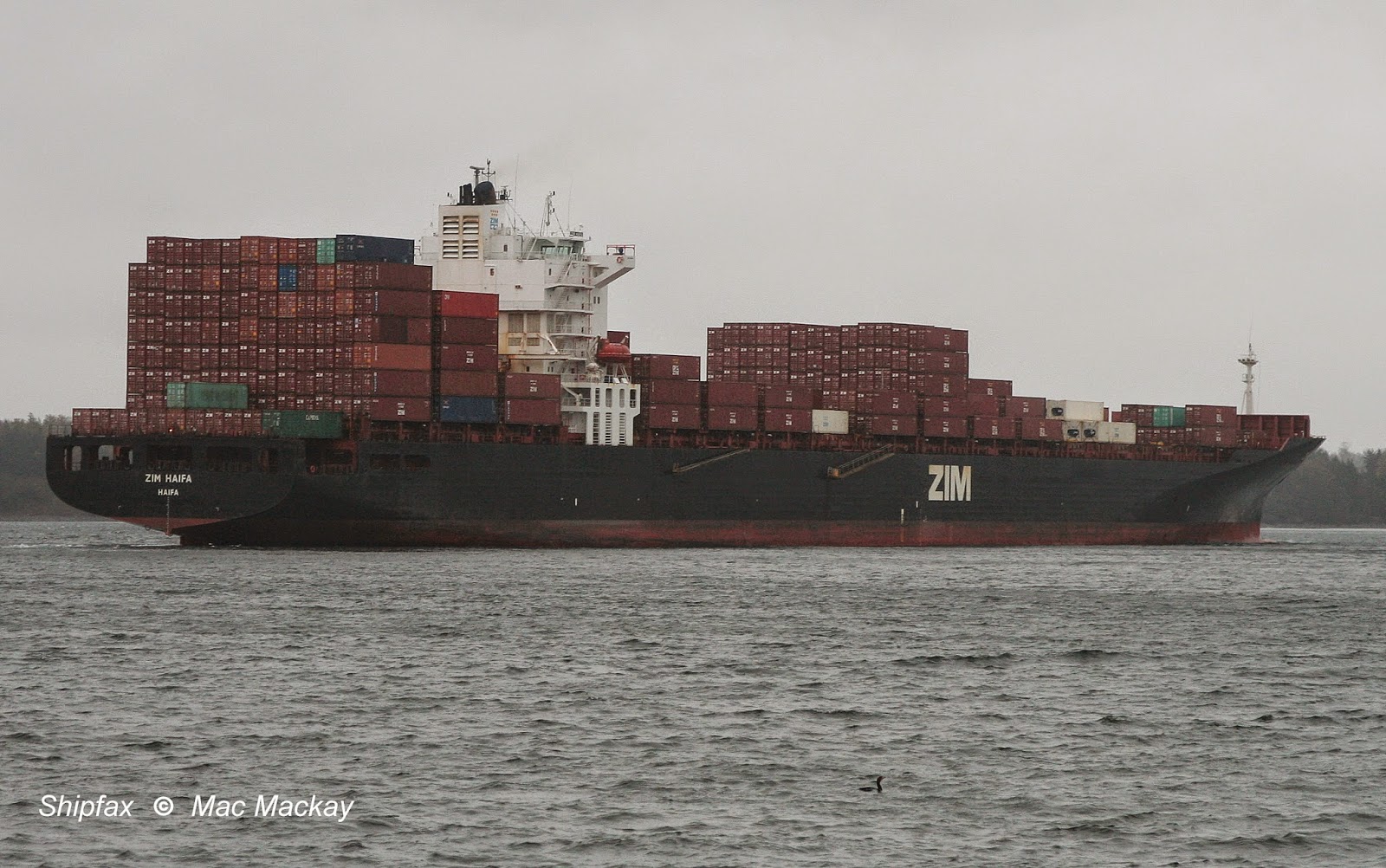 As Zim Haifa left Halterm it met the inbound Zim Texas, which held quite far to the east in the channel. Tugs met it and prepared to swing the ship round to back into the Halterm berth.

Note the lightly loaded Zim Haifa with a huge stack of empties on the stern, and the deeply laden Zim Texas. Nothing speaks so clearly to the trade imbalance than heavily loaded ships inbound from the orient, with little to go back except empties.

Meanwhile back in 1984
I have been asked to show more pictures from my deep archive, and what better than the following, which begs the question- why can't we have more days like this? A beautiful white ship against a dramatic black sky. 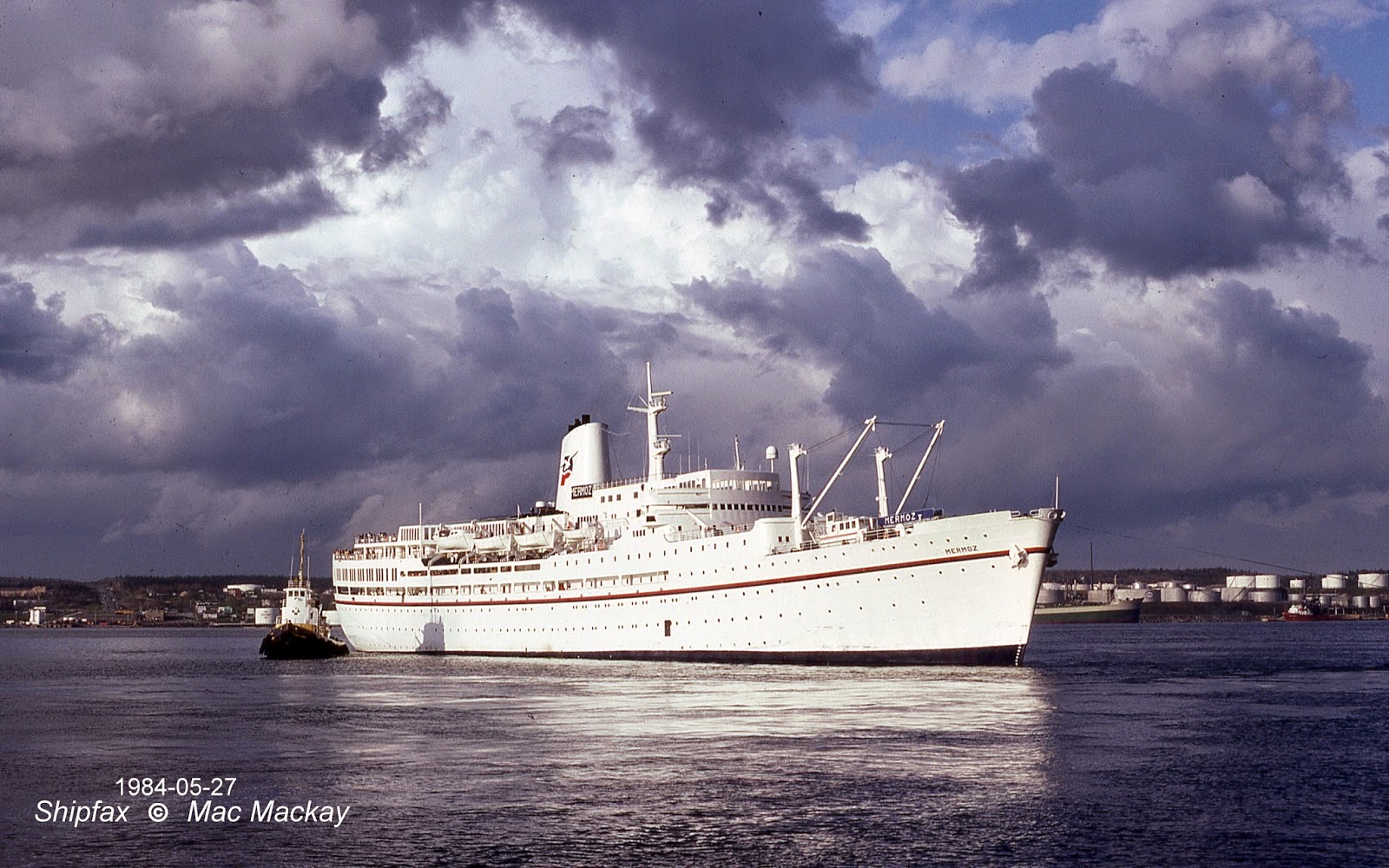 The cruise ship Mermoz sails from Halifax May 24, 1984, with tug assistance. Built in 1957 as the French cargo passenger ship Jean Mermoz by Chantier de l'Atlantique (Penhoet-Loire) in St-Nazaire, it ran between Marseille and West Africa. With capacity for 854 passengers (144 first class, 140 second class, 110 third class and 460 troops) it also carried mail and significant quantities of cargo. It was one of the last ships built for this type of trade, and lasted longer than many. Finally in 1970 it was rebuilt by T.Mariotti in Genoa, with a new funnel, and accommodation for 750 (later reduced to 580) cruise passengers in one class, and renamed Mermoz . Jean Mermoz (b.1901 - d. 1936) was a legendary French aviation pioneer.


Although it changed hands from Paquet French Cruises to Costa Cruise lines it retained its name until 1999 when it went to Louis Cruise Lines of Greece, becoming Serenade, then in 2008 Serena for its trip to the scrap yard in Alang. 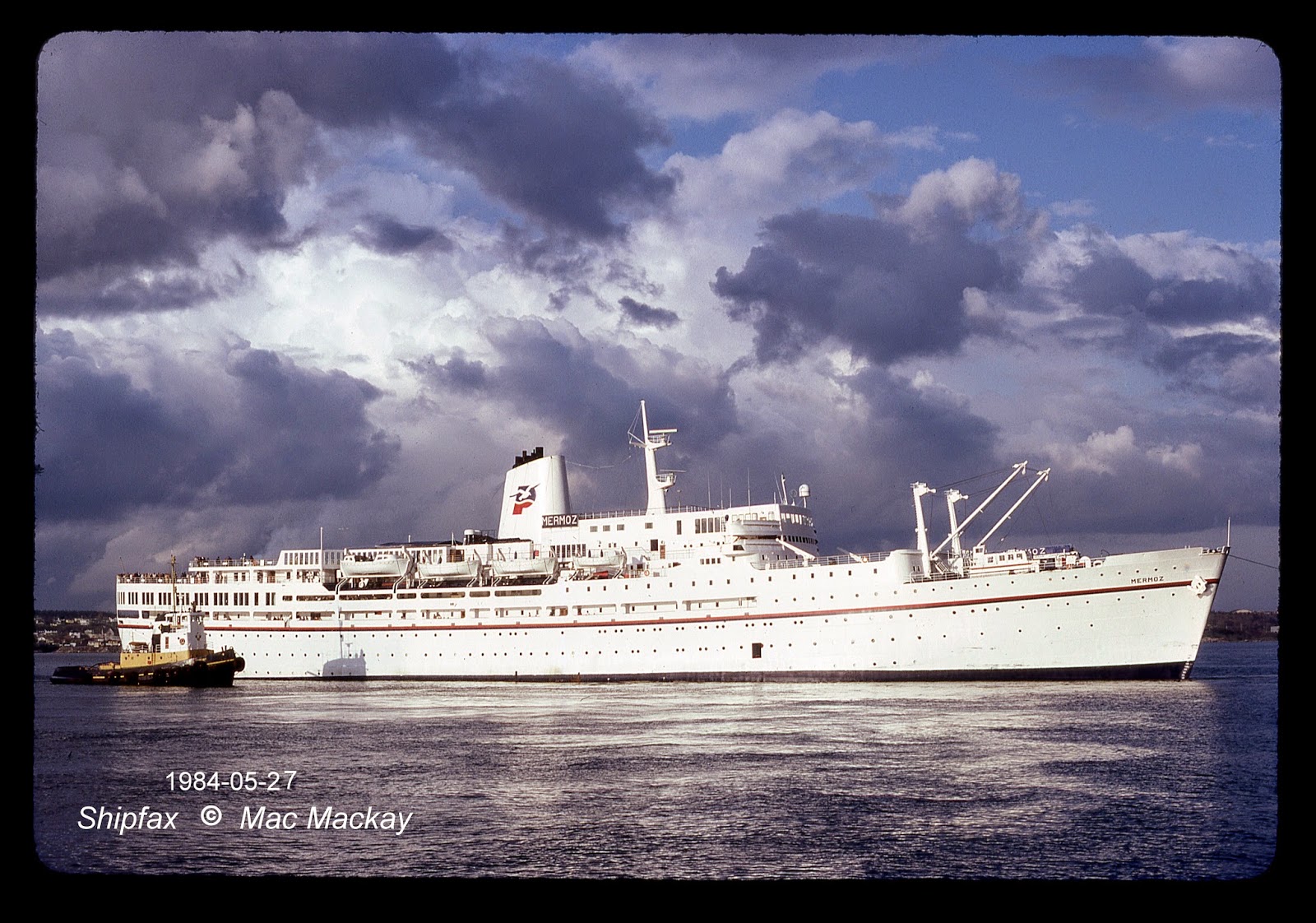 Not seen in the photo is the Point Vigour with a tremendously long bow line. Point Vibert stands by the stern, with orders not to touch the ship unless needed - her tire fenders would leave nasty black marks on the white hull.

Over the course of the next few weeks I will be flashing back to 1984 regularly.