A foggy drizzly day meant that no sun, star or moon was visible, except Altair (the ship that is) which was barely visible as it worked cargo at pier 31. 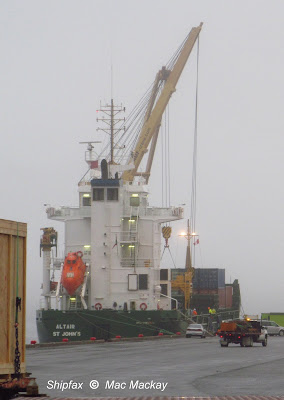 Owned by the Hermann Buss group of companies, it is in service with Nirint Lines and unloaded a cargo of nickel sulfides from Cuba.
Although registered in Antigua and Barbuda and owned in Germany, it was built in the Netherlands in 2006 by the Bodewes Shipyard in Hoogezand. A standard Trader 7800 type from that yard it measures 4990 grt, 7804 dwt with a container capacity of 390 (270 reefers). It is equipped with two cranes of 40 tonne SWL  capacity.
Delivered as Altair it was renamed Onego River in 2006, Hansen Scan in 2009, Industrial Hong Kong in 2013 and reverted to Altair later in 2013.
According to shipyard literature the ship has accommodation for a crew of ten, each with a single berth cabin. Working through the likely crew roster, that amounts to a very minimal workforce to run a ship: Captain, 2 mates, 2 engineers, 4 general duty seamen (deck/engine) 1 cook.