The Canadian flag tanker Nanny tied up at pier 9 yesterday and began to pump its cargo up to Wilson Fuel's tanks on Barrington Street.It is a small tanker of 6544 grt, 9170 dwt.


Owned by Coastal Shipping, part of the Woodward Group of Goose Bay, NL, since 2008 the tanker has retained the name it was given by Swedish owners in 1999. It was built in 1993 by Hyundai Ulsan as Natalie Sif, for Danish owners, and it was under that name that it first appeared in Halifax in July 1998. At that time it loaded equipment to allow it to pump cargo ashore by floating pipeline to remove northern ports. 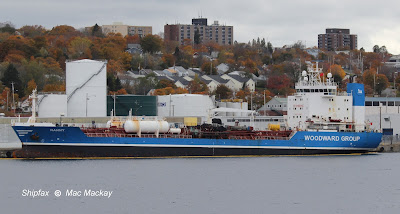 The ship has been back to Halifax, once in June 2012 and again in March 2014, both times for bunkers.

Woodward Group purchases petroleum products on the international market and from Canadian producers and delivers it around Newfoundland and Labrador and to remote northern ports during the summer shipping season.

Unloading operations were winding up this afternoon, and the ship is expected to sail this evening.

Meanwhile in the lower harbour the tanker Zircon made a brief visit to number one anchorage for bunkers. Built earlier this year by SPP Shipbuilding in Sacheon, South Korea, the Marshall Island flag tanker operates for Marina Leasing Ltd of Hong Kong. It measures 29,767 grt, 49,990 dwt.

In for a slightly longer stay is Maersk Magellan at Imperial Oil dock #3. Built in 2010 by Hyundai Mipo, Ulsan, South Korea, as Gan-Trophy It was acquired and renamed by AP Moller in 2013. It is also handy sized at 29,669 grt, 51,551 dwt and  flies the Singapore flag. It arrived yesterday.