Two tankers and not much else but the Louis

It was a wet and windy day in Halifax with very little harbour avctivity. During a brief lull in the weather I was able squeeze of a couple of shots of tankers at Imperial Oil.

Gotland Carolina was at number 4 dock.

With four beefy headlines out due to high wind, Gotland Carolina is well secured at number 4 dock Imperial Oil.

Built at Guangzhou International Shipyard in China in 2006, the 29,203 grt, 53,160 dwt ship is built for winter navigation, and was last here January 7, 2015 with a a light coating of frozen spray. Hafnia Ship Management of Hellerup Denmark operates the ship. On this trip it arrived November 20 and is due to sail early tomorrow morning. 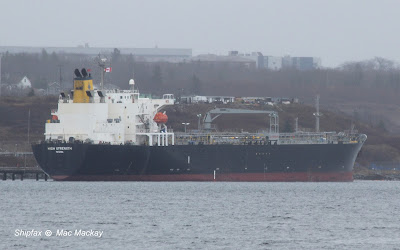 High Strength also has its lines out too, but they are not as visible in the misty air.

A more typical looking handysize tanker of 28,231 grt, 46,592 dwt, it appears to be more suited to tropical conditions and even has awning frames on its bridge wings. Unlike most of the handysizes we see, this one was built in Japan, by Naiki Shipyard in Setoda and even more unusual it is owned by DM Shipping Ltd of Dublin, Ireland, but is managed by Ishima Pte Ltd of Singapore.


Also in port CCGS Louis S. St-Laurent arrived at the Bedford Institute from the North Pole. Both CCGS Terry Fox and the Louis visited that spot this summer, and is making a fairly late return south. 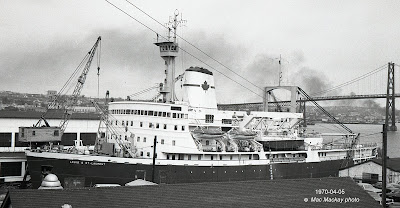 The original, unrebuilt CGS Louis S. St-Laurent in the graving dock at Halifax Shipyard in 1970.

Argentia, NL  is supposedly the base for the Louis but she fits in better here. Lets hope the new government, which has vowed to fix the Coast Guard, with its own minister in cabinet, erases this fiction of St.John's bring a better base for CG icebreakers.(Maybe they'll get the red funnel band back too.)
Too bad the shipyard has no capability of drydocking the ship anymore, since the graving dock is tied up full time with FELEX refits and the floating docks are gone. 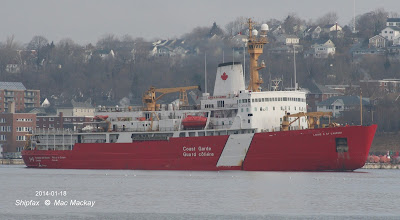 Sailing from Halifax in January 2014. The ship is here almost as much as if it was based here anyway.