LeeWay Marine of Halifax is a marine service company offering research support and other services, and it has acquired its first ship, LeeWay Odyssey. The ship has now arrived in Halifax and it may be a familiar one to some old time harbor watchers, though somewhat changed from its original appearance. 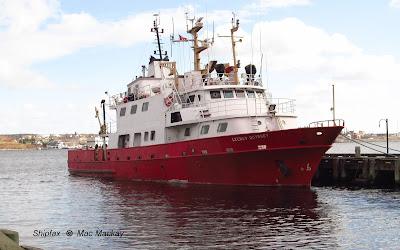 
It is an aluminum hulled former fisheries patrol boat - one of two built in 1977 by the long defunct Breton Industrial Marine in Point Tupper, NS. As CGS Cape Harrison, with sister Louisbourg, it was built to work on the east coast  patrolling the mid-shore fishery, as far out to sea as 120 miles.There were issues of "weatherability" with the craft however, and Cape Harrison was laid up in Halifax in 1982 to be re-purposed. 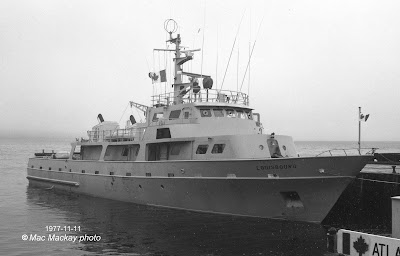 Sister CGS Louisbourg * at Queen's Wharf shortly after delivery in 1977.

Cape Harrison was renamed CGS Louis M. Lauzier in 1983 and fitted with labs on its top deck and extra accommodation for 2 scientists and sent to work doing research work in the Gulf of St.Lawrence.

When the Department of Fisheries was melded into the Coast Guard and Hydrographic fleets, it became a sort of odd man out, and was charted to Memorial University in 1998, but wass inactive for long periods of time.

To provide increased border security, the vessel was again re-purposed in 2005 to accommodate three RCMP officers and fitted with boat launch equipment on the stern. It was then based in Quebec City to provide security patrol on the St.Lawrence River. It was displaced by the Hero class patrol boats was laid up in 2014 in Sorel, QC. 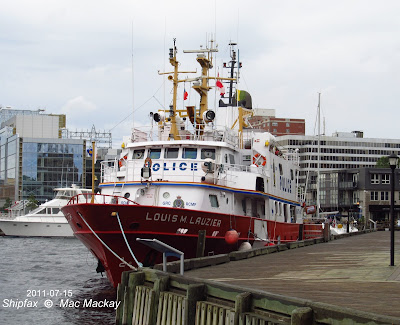 It was renamed 2014-03 and advertised for sale by Crown Assets. Leeway was the successful bidder in its sale earlier this fall and registered the ship as Leeway Odyssey in Halifax October 30. 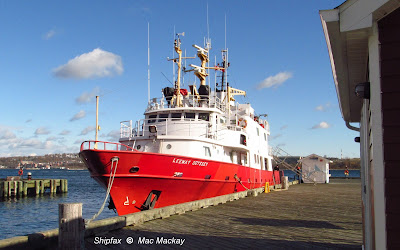 At Sackville Landing this morning, devoid of all its CCG and RCMP insignia, and with a new name stenciled on the bow.


LeeWay has ambitious plans for the ship, which will presumably first go into refit, but the company owners certainly have the credentials to deal with that.


* Louisbourg remained in its original form until it was laid up in 2013. Renamed 2013-03 it was sold in July 2015 and its Canadian Register closed 2015-07-20.
It turned up on the Miami River some time later with the name  La..Cristy classed as a yacht, with a Panama radio call sign and possibly destined for Venezuela.