The pure car and truck carrier (PCTC) Toledo arrived for Autoport this morning. Because there were other ships arriving it had to wait in number one anchorage for a second tug. 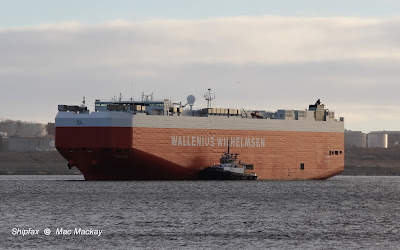 Toledo with Atlantic Willow alongside awaiting a second tug, just before a snow shower created a brief "white out".


Although it has been here before several times, this is the first chance I have had to get a photo. Its first visit was December 15, 2005 when it was quite new, having been delivered in February 2005 by MHI Nagasaki. A 61,321 grt vessel it has capacity for 6,354 cars and works over a 235 tonne capacity stern ramp.

The WilhelmWilhelmsen fleet uses names begining with the letter T and has used some names five or six times. This is only the third Toledo as far I can tell. The first, a general cargo ship was built in 1926 and lasted with the fleet until 1958. It was sold for re-use and finally scrapped in 1964.
The second was a cargo reefer built in 1960, sold in 1979 and broken up in 1984.
The current Toledo may well last 24 years, but it is hard to image it lasting until 2043.

For a complete spec on the current ship see: http://www.wilhelmsenasa.com/aboutus/ourbusiness/thefleet/Pages/mvtoledo.aspx