The Norwegian shipping company Klaveness Ship Holding AS has decided to get out of the bulk carrier business and will sell its five self-unloaders, several of which are known in Halifax.
The $190 mn deal will see the ships sold to affiliates of the CSL Group and Algoma Central, which will keep the ships in the CSL self-unloader pool. 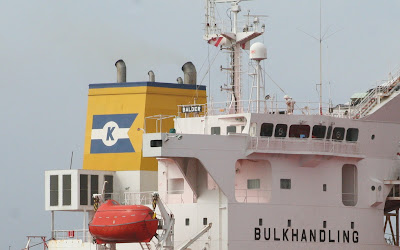 The Klaveness funnel carries a representation of their house flag, which dates back to 1946 when Torvald Klaveness founded the company, pioneering bulk carriers, and under the Bulkhandling name, the first ever shipping pool.

Two ships will go to CSL Americas, two to Algoma Shipping and one to Marbulk, a company jointly owned by CSL and Algoma.
The five ships are Barkald, Balder, Baldock, Balto and Balchen.

Barkald was the first ship arrival in Halifax in 2015, when it arrived January 1.

Barkald is a regular in Halifax for gypsum, but all the ships are frequent visitors to the Strait of Canso to load aggregates.

The current Klaveness Group operates more than 100 ships, so its funnel will not be disappearing from the seas. The company is expanding into containers and other areas.