The bulk carrier CSL Metis arrived on November 8 for some maintenance at pier 26. The former tanker, built in 1981 was converted to a self-unloader in 2007 and has been in Halifax before, but never for cargo. At 43,022 grt, 69,305 dwt it is too big to take a full load of load gypsum here. Its usual port of call is on the Strait of Canso to load aggregates. 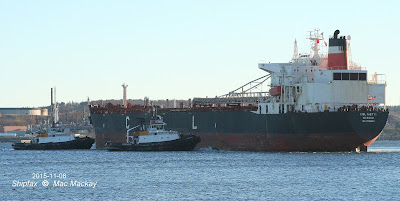 The ship's forebody dates from 2007, but the after section containing engines and accommodation is original. On November 9 divers were working under the stern, and the ship was ballasted down by the bow a bit to reveal much of the rudder and prop nozzle. 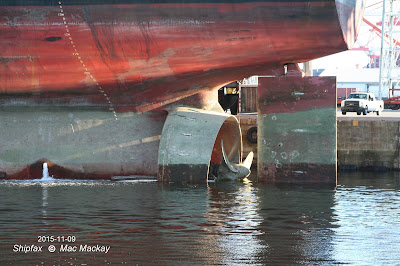 Today I was surprised to a see a conference going on inside the nozzle. A raft was tethered around the prop shaft so some work could be done in the open air. No need for a drydock (see previous post) when the work can be done this way. 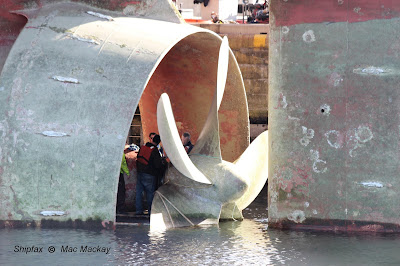 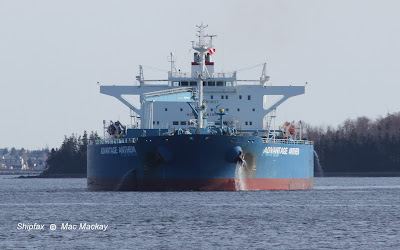 Also in port today the crude tanker Advantage Anthem took bunkers in number one anchorage. It took no escort tug in or out, so despite being fairly low in the water, it must be in ballast. [ I have since learned that the ship had a cargo of heavy fuel oil, loaded at the Valéro refinery in Lévis, QC].  It then sailed for New York.

The ship was built in 2011 by Samsung, Koje, South Korea as Power and measures 61,336 grt, 116,087 dwt. Earlier this year it was renamed by new Swiss based owners Advantage Tankers LLC. It is still operated by a Turkish company with Shell Western Supply and Trading of Barbados as commercial operators.