We got our last look at the remaining section of the Novadock floating drydock today as it "sailed" out of Halifax on the back of Boa Barge 33 in tow of the tug Boa Odin.

The pilot boat Chebucto Pilot (far left) takes the pilot out to the tug Boa Odin at noon. 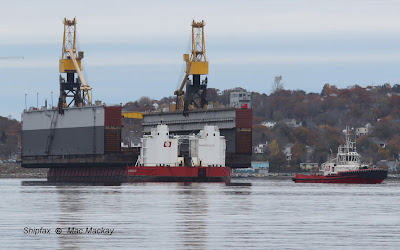 Within a few minutes, the tug has swing the barge around..

... and is heading outbound. Halifax Tugger took off  the barge deck crew. 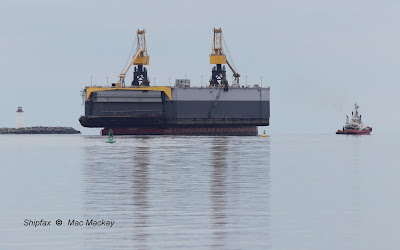 The tow made its stately progession to sea.

Conditions were ideal for the departure, with no seas and no wind. At 1900 hrs this evening, with the tug well offshore it was doing 8.2 knots.

The weather buoy on La Have Bank south of Nov Scotia was recording a height of .5m and south winds 14 gusting to 18 kph (and water temperature of 13 degrees C.)

Our first look at Novadock was on November 15, 1982, when the tugs Irving Miami and Irving Cedar (assisted by Irving Beech and Irving Teak) towed the larger portion of the dock into Halifax from Sorel, QC where it was built. 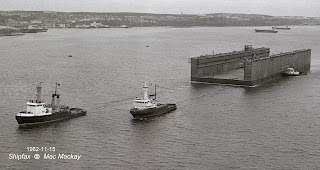 A smaller section, built in Pictou, NS, was towed in November 21. The sections were joined and the dock was completed at the shipyard.When the dock was cut in two this time, it was not cut along the same line. Note the position of the control room on the outer wing in the above photo, and compare to today's photos.