There were a couple of unusual names in the port today, brought in by first time visitors.

The first arrival was Poavosa Brave, a bulk carrier, out of Baie-Comeau with a load of grain. It arrived over night for bunkers, but high winds delayed the start of that operation until evening. 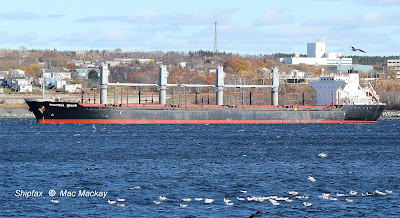 Even the harbour gulls are staying close to the water due to the high wind.
The ship was built in 2009 by Imabari Zosen of Marugame, Japan as ID North Sea and measures 17,018 grt, 28,367 dwt. Certainly on the small size for bulkers, it still carries four cranes. It is also fitted for carrying deck loads such as timber.
Earlier in 2015 it became Poavosa Brave under the Panama flag, managed by Bidsted of Hellerup, Denmark.
The name Poavosa refers to a dialect of the indigenous Taiwanese language Babuza.


The second arrival was also held up by wind. Instead of heading directly to the McAsphalt dock to unload, Palanca Sydney anchored until conditions improved. The McAspahlt dock consists of dolphins with a light bridgework between and would not stand up to any impact.

Built in 2013 by the 3 Maj Brodigradiliste in Rijeka, Croatia, the 10,830 grt, 14,634 dwt ship is specially fitted to carry asphalt and bitumen. The numerous boilers and other equipment on deck give it quite a different look than a conventional tanker.


Its first name, palanca translated from Spanish means lever or leverage. The second, Sydney could refer to either of the ports of that name, one in Australia, and one in Nova Scotia.

Other activity in the harbour included the arrival of Nagoya Express on the return, eastbound, leg of its G6 service. This time the ship berthed at Halterm to avoid transiting under the Narrows bridges. Despite its huge deckload it was still quite high in the water, signifying a lot of empties headed back to Asia. 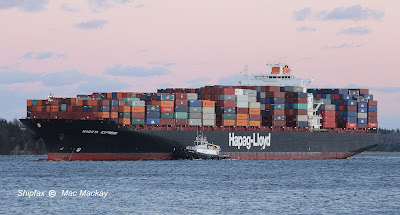 When it was here on the westbound leg it docked at Fairview Cove. Check out the difference in draft and deckloads:Shipfax October 27.