It seemed to all about going today.

The cable ship Responder sailed this morning after an overnighter at pier 26. It is a sister ship of Decisive and Resolute that were here earlier in the year laying the new Hibernia Express cable between Halifax and Ireland. 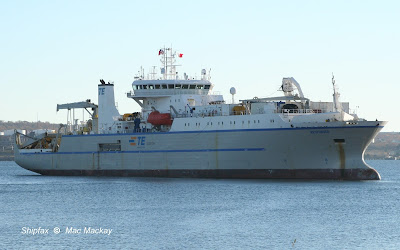 Built in 2010 by Keppel in Singapore as Tyco Responder, the ship arrived from Portsmouth, NH and sailed for New York.

There were two autocarriers in Halifax today and I happened to be in position to see them sail. 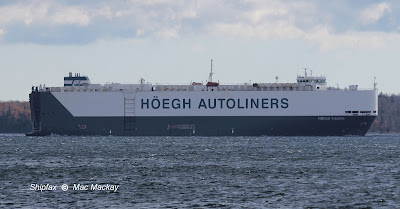 Hoegh Xiamen was the morning ship. It was built in 2010 by Xiamen Shipbuilding Industry in Xiamen, China.It sails under the Norwegian flag for Hoegh Autoliners. 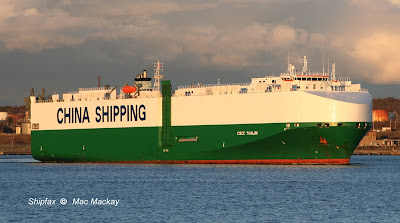 Taking its place and sailing late in the afternoon was CSCC Tianjin. Despite its China Shipping billboard, it is owned by Ray Car Carriers of the Isle of Man and managed by Stamco of Piraeus, Greece, under the Bahamas flag. It was built in 2008 by Uljanik in Pula, Croatia. 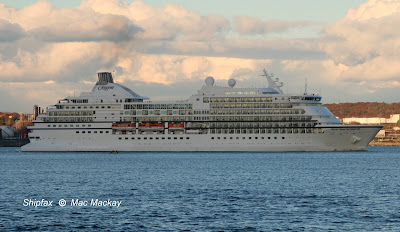 Also going, was the last cruise ship of the season, Seven Seas Navigator is an exclusive ship with only 250 cabins and a crew of 345. It was built originally in 1999 in St.Petersburg, Russia to be a USSR naval support vessel to be named Akademik Nikolay Pilyugin. However it was completed by T.Mariotti of Genoa for cruising. It has been a Halifax caller since 2003. 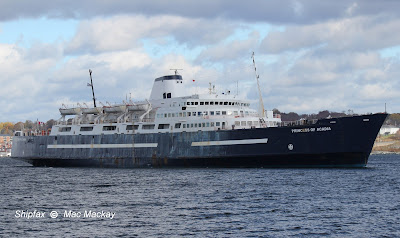 Also going was the Princess of Acadia. Not sailing however for the Turkish scrapyards (at least not yet) it is only going as far as Sydney, NS. That suggests a cold layup of many months until a sale can be arranged.

Arriving today, but going tomorrow, the tug Boa Odin and Boa Barge 33 will be taking away the second and last section of the Novadock floating drydock.

The drydock's departure leaves Halifax with no available drydocking capability for civilian ships. Halifax Shipyard's Graving Dock is continuously occupied by refitting naval vessels, and HMC Dockyard's synchrolift is for the exclusive use of the relatively light weight naval vessels, mainly submarines.