Two autocarriers for Autoport today, and another tomorrow - that makes seven this week, not including Oceanex Sanderling. Who is buying all these cars?

Today's crop were a little out of the ordinary. First in was Paganella ex -CSAV Rio Illapel-14, built in 2009 by the Yangfan Group in Zhoushan, China. China has not been a big builder of autocarrier, so it is rare in that sense. It is also a member of the F. Laeisz fleet of Hamburg, the famous "Flying P" line of square rigger days, still going strong. All ships in the fleet have always had names beginning with the letter "P". In this case the ship is named after a ski mountain in Italy. 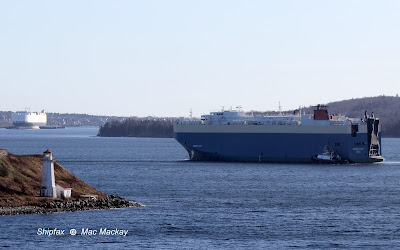 As tugs unberth Paganella at Autoport, Serenity Ace moves into the number one anchorage area to slide in when the way is clear.

Its place was taken by Serenity Ace dating from 2008, built by Stocznia Gydnia in Poland - also not a large builder of such ships. It is owned by Serenity Maritime Ltd. 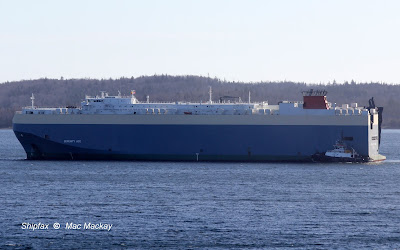 Serenity Ace has a slightly different look with the sweeping hard chine from the bow.