Squeezing two ships into piers 27 and 28 today meant one ship has it bow projecting out in to the harbour. That ship is Onego Pioneer with a load of rails from Poland for CN. It berthed stern inward permitting it to work its cargo and to leave room for Genco Ardennes to load grain at pier 28.[see Update below] 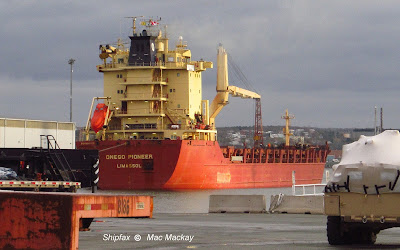 Onego Pioneer stern inward at pier 27.
Onego Pioneer has had an interesting career since it was built by Jingjiang Shipyard in China in 1999 as Atlantic Pionner for the beneficial ownership of Intership Navigation Co-op Ltd of Limassol, Cyprus. It is a multi-purpose ship of 12,993 grt and 17,451 dwt. It has removable tweendecks in its three holds and can carry 984 TEU, but it is more likely to carry general cargo handled by it pair of 40 tonne cranes.
In 2001 it was chartered to Seaboard Shipping and renamed Seaboard Pioneer, and in 2007 to Fednav and renamed Federal Pioneer, recalling the name of a previous Fednav ship. In 2001  it took up another charter as CCNI Tumbes until 2013 when it reverted to its original name Atlantic Pioneer. Earlier this year it began a charter to Onego Shipping and Chartering took the name Onego Pioneer. 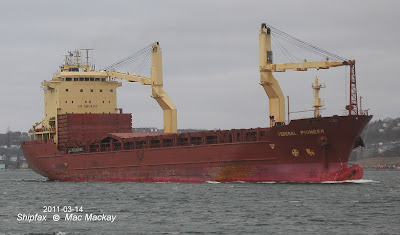 The ship called here for bunkers in  2011 as Federal Pioneer. 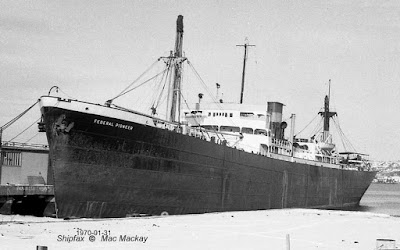 The original Federal Pioneer was a wartime built "Park Boat", Outremont Park, a product of Montreal Shipyard in 1944. A typical North Sands type Victory ship, it measured 7,158 grt and 10,697 dwt. It was powered by a triple expansion steam engine built by Dominion Engineering Works. Following service with the Canadian government owned Park Steamship Co in 1946 it was sold to Funress Canada and renamed Brazilian Prince. It went into service for Prince Line until 1958 when it was sold to Federal Commerce + Navigation Co Ltd [now known as Fednav] becoming Federal Pioneer.and transferred from British to Canadian registry in 1959. It worked on Northern Supply work every year until 1969 with occasional off season deep sea work, but also including the winter of 1960-61 spent in Toronto with a storage cargo of corn.
The ship was based in Halifax and as it aged it worked less and less and became a fixture on the waterfront during long layups from fall to summer. 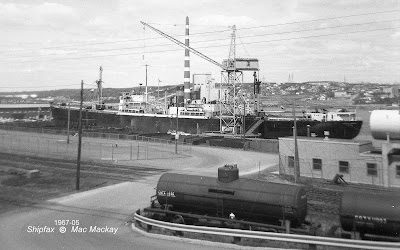 Just out of drydock, the ship is tied up at the old dolphins which have now been removed and the area  filled in to become the new pier 8. The Tuft's Cove generating station of the Nova Scotia Light + Power Co has recently opened and only has one chimney. At the ship's bow is the former Volvo assembly plant.

After the 1970 northern supply trip it was sold to Taiwan breakers and arrived in Hsinkiang January 21, 1971 after a fueling stop in Honolulu. [I have been unable to locate Hsinkiang, but that is how the port is spelled in various reliable sources.]


Meanwhile at pier 28 Genco Ardennes was squeezed in later this morning to the point where no reasonable photos were possible. Maybe I will get to see it on departure. 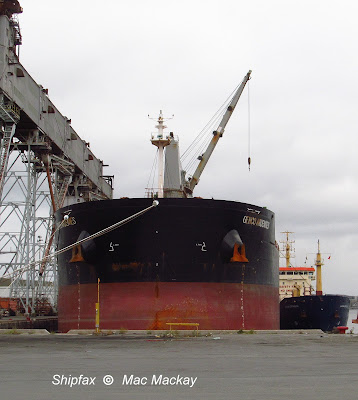 Genco Ardennes began to take fuel the moment it was secured at pier 28.

The ship was built in 2009 by Yangzhou Dayang Shipyard in Yangzhou, China as Tabor and measures 32,837 grt, 57,790 dwt. In 20910 it was acquired by Genco Ship Management of New York, but is managed by Wallem Ship Management of Hong Kong.
Its grain cargo has been arriving by rail for some time and the elevator has been running overtime.

Update:
Oops: the ship is loading 33,000 tonnes of wood pellets. The pellets are also handled through the grain elevator, and that is why the facility has been running overtime. 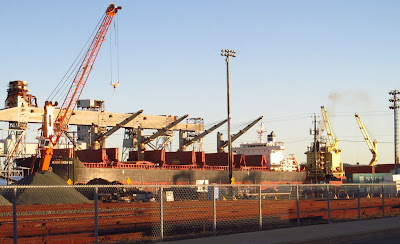 Whne the ship arrives at its destination it will use its own cranes and grabs to unload.

This afternoon's arrival was OOCL Southampton on the G6 service with Hapag-Lloyd and other partners. I missed the ship's first arrival September 8,. Built to the typical post-Panamax pattern by Samsung, Koje in 2007 it is an 8063 TEU ship (including 1400 reefers) of 89,097 grt, 99,518 dwt. The ship went right through to Fairview Cove.