It was not exactly morning in Margaritaville at Autoport today. Blustery would be more like it, with gusty high wind and rain at times heavy, but this did not dampen the process of unloading another batch of European autos. 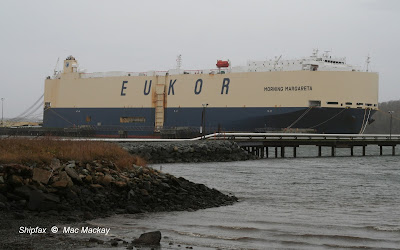 The seemingly inexhaustible demand for German cars continues and Autoport is going full out to keep up with the  wave of incoming BMWs, Audis and Volkswagens. 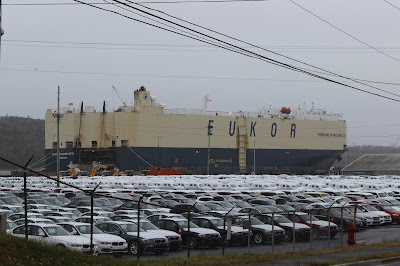 The distinctively named Morning Margareta is making its first ever call today, and carries the EUKOR billboard (for EURope KORea), but carries whatever cars are on offer as it works it way around the world circuit. Owned by United Ocean Enterprise in Singapore, the ship also flies the Singaporean flag. It was built in 2008 by Tsuneishi Dockyard in Tadotsu, Japan and measures 51,917 grt, 17,386 dwt and has a capacity 5,340 cars.
The EUKOR fleet numbers nearly seventy owned and time chartered pure car carriers (PCCs) and pure car and truck carriers (PCTCs), many with the "Morning" names and others with "Asian".