There were three notable arrivals in Halifax today - some making more of an impression than others.

The first was the Canadian owned Zélada Desgagnés, arriving from Freeport, Bahamas, under the Barbados flag. Like several of her sister ships in the Transport Desgagnés fleet, the ship spends a portion of the year trading internationally under foreign flag. Come summer however the ships return to Canadian flag and prepare to service northern Quebec and arctic ports during the July - October resupply season. 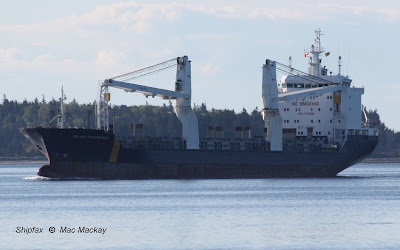 Zélada Desgagnés dates from 2009 when it was built by Qingshan Shipyard in Wuhan, China as part of a large order of heavy lift general cargo ships initiated by Beluga Shipping. Launched as Beluga Freedom, it was renamed Zélada Desgagnés on delivery. It was initially registered in Canada in January 2009 but reflagged to Antigua and Barbuda to work for Beluga Shipping  until June 2009 when it arrived in Canada. Despite the failure of Beluga Shipping, the ship has continued to work bareboat charters for much of the year.
The 9611 grt, 12,850 dwt ship is equipped with two 180 tonne cranes. Fleet mates Rosaire A. Desgagnés (ex Beluga Fortification) and Sedna Desgagnés (ex Beluga Festivity) are fitted with two 120 tonne cranes but are essentially sister ships. 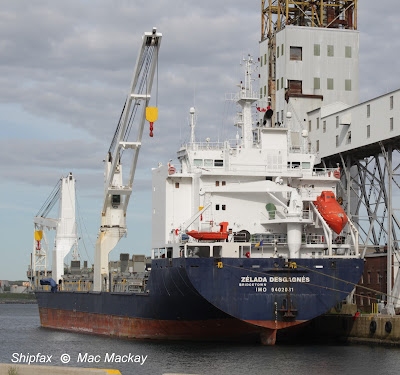 The port of registry of Bridgetown (Barbados) is offset to port, but welded letters ''Quebec'' are centered under the ship's name. A few brush strokes will return them to prominence, while Bridgetown will be painted over.

The ship tied up at pier 26 where it is expected to be handed over to a Canadian crew and reflagged in the next few days. 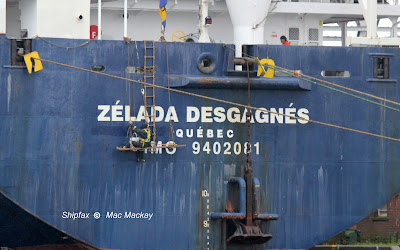 Despite fog and rain the foreign crew was busy returning the ship to its pre-charter condition. This also included painting QUÉBEC as the port of registry. The ship is still flying the Barbados flag, so the actual handover has not yet taken place.

Captains J. Henri-Zélada Desgagnés (b.1880) and his son Joseph Artur Zélada ''Mick'' Desgagnés (b.1903) were, among the founding fathers of the current Desgagnés fleet, which is no longer family owned, but nevertheless pays tribute to its roots by continuing to honor the family name.

A pair of new vessels to Halifax made their arrivals today:

Kawartha Spirit is the latest acquisition of the Ambassatours fleet, as a replacement for Haligonian III. Of essentially the same design, and built by the same builders, Hike Metal Products Ltd of Wheatley, ON, Kawartha Spirit  is in fact eight years older, built in 1964. However it has spent its entire existence in fresh water, first as Miss Muskoka. It has also been upgraded with a more modern wheelhouse and other amenities. 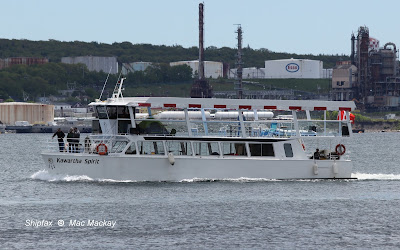 Its last owner, Randy Hinton of Bobcaygeon, ON operated the boat for 26 years until accepting the offer to sell to Ambassatours. He also undertook to deliver the boat down the Trent Severn Waterway, across Lake Ontario to the New York State Canal  system to New York City, then hugging the coast to Halifax.

I am hopeful of a name change, but so far Ambassatours is using the Kawartha Spirit name in its advertising.

The most noted, but perhaps least auspicious arrival today was the debut of the Katie Belle, the product of amateur boat building cousins from Stewiacke, NS. They captured the imagination of many with their five year home build project schooner, which has already this year sailed as far as Charleston, SC where it was rigged and outfitted with sails. 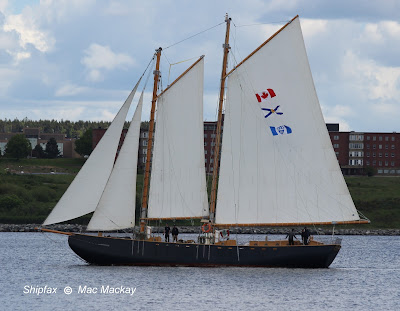 Construction of a 23m schooner is no doubt a singular achievement, but the boat's graceless lines and high freeboard show little reference to Nova Scotia schooner tradition. 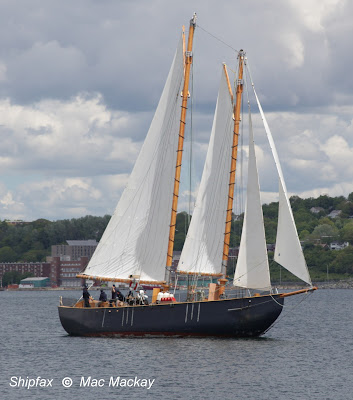 Its much anticipated arrival in Halifax nearly resulted in tragedy however, when it cut across the main shipping channel, without warning or communication forcing the auto carrier Zenith Leader to stop engines to avoid a collision. Later tacking about in the harbour caused some concerns among other vessels as well, most notably the harbour ferries.

Failure to maintain VHF listening watch, failure to adhere to navigation lanes, failure to give way and general inattention are among the most common  misdeeds of pleasure sailors in Halifax, giving commercial shipping fits on an almost daily basis in the summer season. I have never heard of any  consequences for violators however. So it seems unlikely that carelessness and ignorance of the rules of the road is likely to change without police or Coast Guard enforcement. Someday an accident will happen.