Cars, gas and more waiting - all singing the blues

Much of Halifax's shipping activity this weekend has centered on automobiles and the fuel to run them. Of course there was other activity too and for some reason the predominant colour was blue.

The big autocarrier Neptune Ace spent the morning at Autoport so did not have a huge number of cars to land, although it has a capacity of 6400. 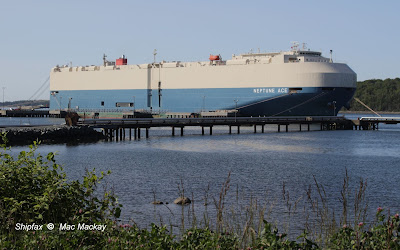 The 59,996 grt, 18,346 dwt ship was built in 2010 and is registered in the Bahamas for Mitsui OSK Lines Ltd of Tokyo. MOL also owns the Minaminippon Shipbuilding Co that built the ship, likely at its Shitanoe shipyard.

Also in for a morning visit was the tanker Citrus, flying the Maltese flag. 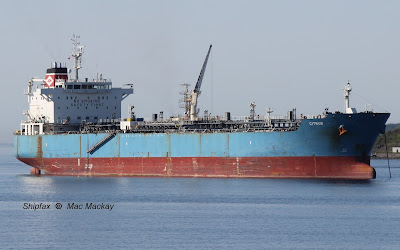 Well out of the water, the ship shows off a bulbous bow. Newer tankers are omitting the costly protrusion, since its benefit seems to be mostly at higher speed than the ships usually travel.

Part of the Diamond Ship Management fleet headquartered in Greenwich, CT, it was built in 2008 by Hyundai Mipo in Ulsan and measures 29,295 grt, 46,934 dwt. 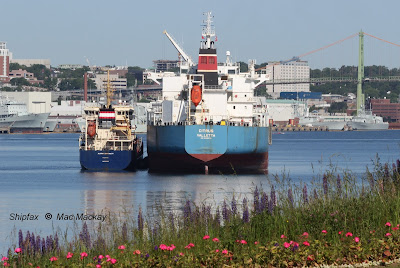 It is high season for flowering plants, including purple lupins, but no citrus is to be found around Halifax harbour. 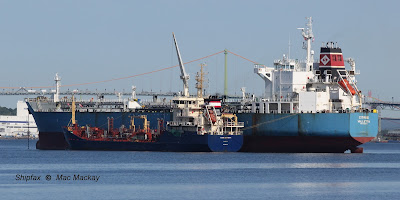 Algoma Dartmouth is tied up alongside to deliver bunkers - blue on blue.

Citrus was en route from New Haven, CT to Point Tupper, NS when it dropped in to top up on fuel.

Meanwhile waiting patiently since June 23  in Bedford Basin is the tanker Ardmore Seatrader.

It flies the Marshal Islands flag for Ardmore Shipping Services of Cork, Ireland. Built 2010 by Onomichi Zosen as St.Georg it was renamed in 2010. The 28,552 grt, 47,141 dwt ship arrived from Paldiski, the port for Tallin, Estonia.
Ardmore Shipping's blue funnel continues today's blue theme.

Speaking of patience the crew of the cargo ship Spiekeroog may be getting the blues as their ship is setting a bit of a recent record for Bedford Basin anchorage.

It arrived in Halifax May 8 and was fitted with a undersea cable holding rack in the hold (called a tank in the cable business). It then went to anchor in Bedford Basin May 16. On May 19 it sailed for Newington, NH to load cable and returned May 30. Aside from a one day visit to pier 9C for fuel and water on June 17, the ship has remained in the anchorage ever since. 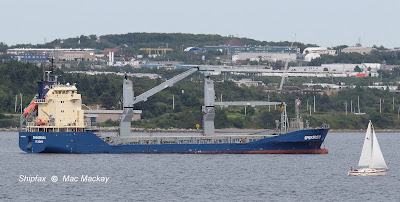 Would Spiekeroog's crew rather be sailing?

I understand that it will be sailing in mid-July. 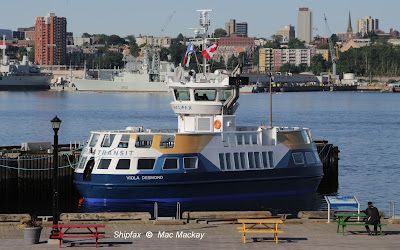 It will not be waiting as long however, since it is due to go into service very soon. Its blue, yellow and white colour scheme blends nicely with the picnic tables on the Dartmouth waterfront. A man in blue keeps an eye on things.

There may be some additional waiting overnight in Bedford Basin.


The self-unloading bulker Algoma Mariner arrived this morning to load gypsum. Since that work will not be completed until late tonight after cutting work begins on the Macdonald bridge, the ship has opted to remain in port until morning. Algoma ships' deep blue hull colour appears black in some light. 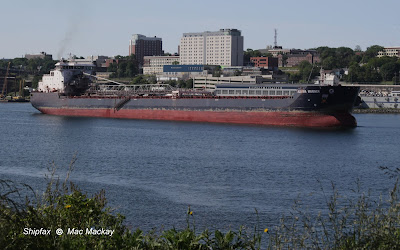 Algoma Mariner was a frequent caller at Little Narrows, NS on the Bras d'Or Lakes, but Canadian Gyspum Company will not be mining this summer due to week demand for the product. A decision on the future of the mine, which has been in operation since 1935, is expected later this year.


Not likely to wait, the giant G4 ACL ship Atlantic Star is due to sail at midnight. 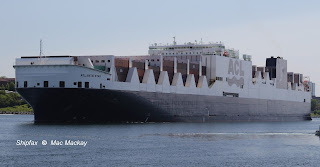 The big blue ship strides up the Narrows this morning en route to Fairview Cove.

These June 10 photos show what happens when the torches start up to cut out old bridge deck sections: 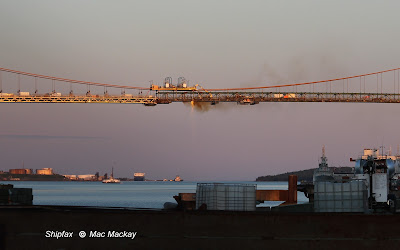 New bridge deck sections installed on the Dartmouth (east) (left in photo) side of the span. 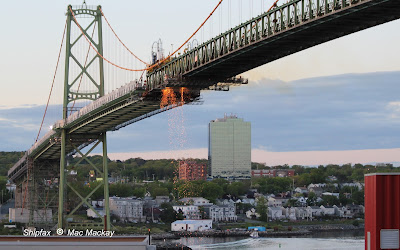 Work is coordinated with ship traffic so that there is no hot work when ships need to transit under the bridge.
Since these photos deck replacement has passed beyond the mid point and is now on the Halifax side of the centre span.