One of the world's leading tanker operators, the Danish company TORM is noted for its unique colour scheme. Their black hulls and burnt orange superstructures mean that they stand out wherever they go. TORM is also noted for having survived a near death experience following the 2008 economic crisis. 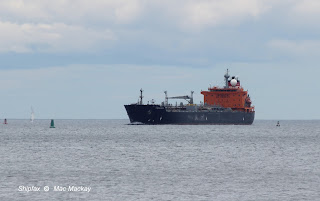 As a resulted of a complex restructuring process over a five year period, the company, now known as TORM plc, with a British parent company, is traded on the NASDAQ Copenhagen exchange.
Founded in 1889 by Dietlev Torm and Christian Schmiegelow and publicly traded since 1905, it was known as TORM A/S until the recent transaction. Oaktree Capital Management, an American bail-out specialist, and a number of banks managed to rescue the company which now has a fleet of 77 owned tankers and 4 charters, with several more under construction for delivery over the next two years. It has exited the unprofitable bulker business.

Even with so large a fleet it is unusual to see two of them at the same time, but that was the case this evening.
First to arrive was TORM Madison which tied up at Imperial Oil dock 3 yesterday.

Torm Madison sports a gigantic satnav"golf ball" on its monkey island.
Built as Nina in 2000 by Daedong Shipbuilding Corp of Jinhae South Korea, it became Madsion in 2001 when it was purchased from Seaarland Management by OMI. In 2008 in a previous deal, TORM A/S and Teekay took over the OMI fleet as a joint venture and renamed the 23,8423 grt, 35, 828 dwt  tanker TORM Madison.

By contrast Torm Mary has a miniature version on its signal mast.

Today's arrival is the much larger TORM Mary, from Bonny, Nigeria. It was built in 2002 by STX Shipbuilding Company in Jinhae, South Korea. The 30,128 grt, 46,348 dwt ship anchored in the harbour and is due to sail later on.
It is one of the ships purchased from TORM A/S by Oaktree subisidiary OCM Njord in 2012. In 2015 Njord contributed 25 ships to TORM in exchange for controlling interest in the company.  TORM Mary was managed all along by TORM, but returned to TORM owership. 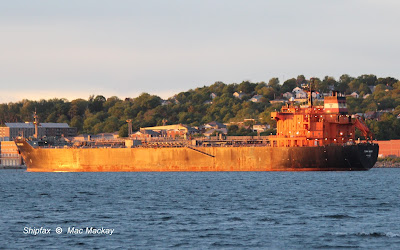 The setting sun turns the back hull into a burnt ortange to match the superstructure.
.
Posted by Mac at 10:57 PM