Return from the Med

A strange sight for Halifax today was the arrival of an OOCL ship in non-OOCL livery. The Panamax OOCL Mexico arrived on G6 Alliance service and tied up at Fairview Cove.

OOCL Mexico in the Narrows en route to Fairview Cove.
Built in 2002 by Hyundai Heavy Industries in Ulsan, South Korea it immediately went into charter as Zim Mediterranean and arrived in Halifax for the first time April 5, 2002 It was the first of six Panamax sister ships to go to work for Zim. It flew the Israeli flag and was owned by the Ofer Brothers Group, then a major shareholder of the previously state owned Zim.

Zim Mediterranean in bound to Halterm on its second visit to Halifax May 7, 2002. 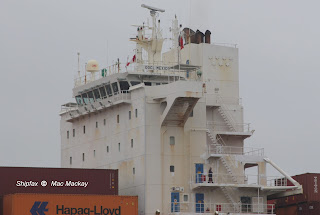 The seven stars of the Zim funnle marking were painted over when the Zim charter ended.

On completion of the Zim charter in 2014 the ship was then chartered to OOCL with only the name changed and Zim markings painted over. It also hoisted the Liberian flag. In 2012 the Ofer Holdings Group changed its name to XT Group of Tel-Aviv, and they are listed as the ship's current owner.

For more on the history of Zim see: Zim.com legacy